Le'Veon Bell is an American football running back for the Pittsburgh Steelers of the National Football League. He also played college football for Michigan State. He was drafted by the Steelers in the second round of the 2013 NFL draft.

Le'Veon Bell has an estimated net worth of $12 million. Currently, he is in an affair with Marliesia Ortiz.

He was born on February 18, 1992, in Reynoldsburg, Ohio. He is the third son born to Bell family. His mother, Lisa A. Bell, and grandfather have been lifelong fans of Pittsburgh Steelers.

Bell attended Groveport Madison High School which is located in Groveport, Ohio, where he played football, basketball and ran track. He played running back for the Groveport Cruisers football team.

He joined at Michigan State University and played for the Michigan State Spartans football team from the year 2010-2012. He has played 13 games, rushing for 605 yards on 107 carries with 8 touchdowns and also added 97 yards on 11 receptions and returned six kickoffs for 142 yards as a freshman. He led the Spartans in rushing with 948 yards on 182 carries and 13 touchdowns during the second year in 2011.

He had 165 all-purpose yards with 96 rushing, 38 receiving, and 31 kickoff return yards and two total touchdowns in the game against the Minnesota Golden Gophers and had 161 yards of total offense and a rushing touchdown against the Iowa Hawkeyes. He was planned to be a second or third-round selection by the majority of analysts while coming out of Michigan State.

TARGET // My new single “Target” is out nowww... go check it outtt! #Juice

He finished his rookie season with 244 carries, 860 rushing yards, and eight rushing yards and also had 45 receptions for 399 yards and started the last 13 games of the season.

On March 16, 2018, the Steelers placed the franchise tag on Bell for the second straight year worth $14.5 million.

Le’Veon Bell is of American nationality and belongs to black ethnicity. He is an unmarried man. He does not have a wife in his life. Currently, he is in an affair with Marliesia Ortiz. 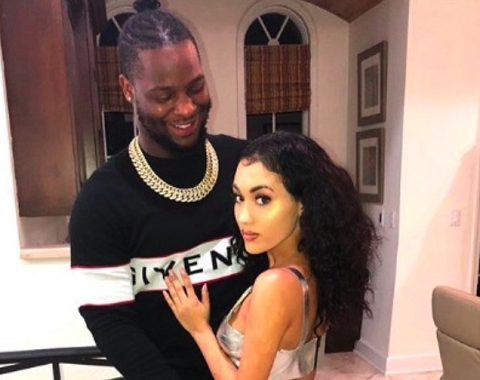 The duo is happy in their relationship. He also posted several pictures along with his girlfriend on her Instagram account. The duo has a baby girl together born in January 2017.

Previously, he was in an affair with Jourdan Taylor.

His total incomes, salaries, and earnings from his game boosted his net wealth. He has an estimated net worth of $12 million.
Football Running Back
Videos
More Biography