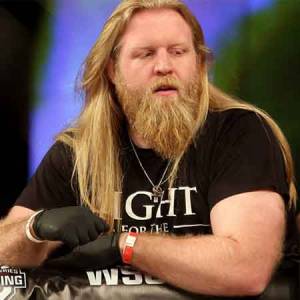 Justin Christopher Wren, famously known as Justin Wren is an American Mixed Martial Artist Fighter who is also known for his philanthropic works.

Even though, Justin Wren net worth has not been officially disclosed as of now as it is still under review. However, it is assumed that he has a hefty amount of fortune through his professional career as an MMA fighter.

According to the source, his career disclosed earning is $28,000.

Justin Wren is a happily married man and Wren is married to his spouse, Emily Wren. The couple had one of the most romantic proposals ever, where Emily proposed to him via phone and recorded her proposal too.

Emily and Justin Wren tied their wedding knot in 2014. The couple is currently enjoying a happy and blissful life with no rumors about their separation and divorce.

Furthermore, Justin Wren has done several charitable works for  Fight for the Forgotten and donated a portion of his earnings to build homes and freshwater wells for Pygmy People in the Democratic of Congo.

The American MMA athlete, Justin Wren stands at a height of 6 feet 2 inches tall and weighs around  106 kg. He has a reach of 75 inches which he uses to his maximum effect during his matches.

Justin Christopher Wren also knew as Justin Wren was born on  April 27, 1987, in Dallas, Texas, United States of America. He is of American nationality and having a white ethnicity. Wren was a standout wrestler in Bishop Lynch High School.

During his time, he was the Prep State Champion and Prep all-American on two separate occasions. Wren later went to win the Prep National Championship during his senior year in  Lehigh, PA.

Justin Wren made his professional MMA career debut in 2006. In his debut match, he took on Ronald Stackhouse that took place on  2 December 2006 in MOTC 7 series, Master of the Cage 7.

After fighting for Colorado-based MMA promotion, Ring of Fire MMA, he signed a five-fight contract negotiation with American famous MMA promotion, Bellator MMA in the summer of 2015. He made his Bellator MMA debut against Josh Burns at the event, Bellator 141 that took place on August 28, 2015. Wren emerged victorious via a unanimous decision, His next fight came against Juan Torres that took place on February 19, 2016.

Justin has also published a book named Fight for the Forgotten: How a Mixed Martial Artist Stopped Fighting for Himself and Started Fighting for Others, the book is an autobiography published in 2015 which is rated 4.2 out of 5 by good reads.