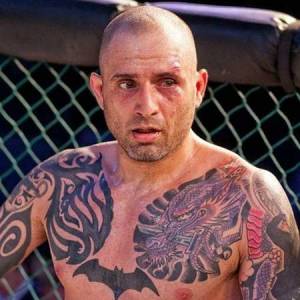 He is also known by the nickname “Batman.” He is a super tough fighter as Gozali served as a soldier in the Israeli army and was stabbed six times while he was working as a bouncer in Israel.

Haim Gozali is a native of Bat Yam, Israel, born on 6th May 1973. His star sign is Taurus. By nationality, Gozali is Israeli and is Arabic by his ethnicity.

Net Worth and Endorsement of Haim Gozali

Haim Gozali has amassed his wealth widely through his professional MMA career. Presently, he is signed to Bellator MMA which is considered his primary source of earning. Gozali took home $10,000 for his bout against Jose Campos.

However, he has not disclosed his exact figure of net worth and salary. But looking at his professional career, Gozali’s net worth shouldn't be less than in seven-digit figure.

On 1st January 1998, Gozali made his professional MMA career debut against Carlos Newton at Israel Fighting Championship – Israel vs. Canada. He lost his first pro fight via armbar submission in the round one.

On 17th December 2006, he faced Ronaldo Souza at JF 7 – Jungle Fight Europe. He lost the fight via rear-naked choke submission in round one.

Gozali next faced Rustam Bogatyrev at FEFoMP – Mayor Cup 2012 and was again defeated but this time via TKO.

In his 9th Fight, Gozali faced Zdravko Zdravkov at AFN – Anaconda Fight Night. He won the fight via armbar submission.

On 10th November 2016, Gozali made his Bellator debut against Zane Clerk at Bellator 164 – Koreshkov vs. Lima 2. He won the fight via heel-hook submission.

On 24th June 2017, he was defeated by Ryan Couture via unanimous decision at Bellator 170 – Sonnen vs. Silva.

His third Bellator fight came on 26th of November 2017, at Bellator 188 – Lahat vs. Labiano, where he successfully beat Mykyta Mikhno via technical submission.

At Bellator 192 – Jackson vs. Sonnen, Gozali faced Jose Campos on 20th January 2018. He lost the fight via unanimous decision. He will face Ryan Couture at Bellator 209.

The Israeli batman, Gozali is a private person when it comes to his personal life. There is no rumor of him being involved in a relationship with anyone as of now. It is also unknown if he is married or not.

At the Bellator 188 @spiketv broadcast @goldieontv call me the Israeli batman so the  @glazeriko made me a present!!!

Though the fighter actively surfs social sites such as Instagram and Twitter, he has not shared any pictures with a potential partner.

Hence, he might be single and unmarried as per our record.