Justin Allgaier was born Justin M. Allgaier on June 6, 1986, in Spaulding, Illinois. He is the son of Mike Allgaier and his wife, Dorothy Allgaier. Much about his early life and parent is under investigation. Allgaier graduated from High School and enrolled at Lincoln Land Community College for a bachelor's degree in engineering. Talking about his physical appearance, Justin stands five feet and six inches tall and weighs 60 kg.

Justin Allgaier's Net Worth and Earnings

Justin Allgaier has an estimated net worth of more than $10 Million. He has accumulated most of his net worth as his prize money, salary, and endorsement. Allgaier must be making a handsome amount from his sponsorship and advertising deals with BRANDT Professional Agriculture, Hellmann's, Klondike, Trademark Nitrogen, Suave Men, Off Axis Paint, Federated Auto Parts. Until 2015, Justin had taken home a sum of $8,334,711 as his earnings from NASCAR Cup Series. 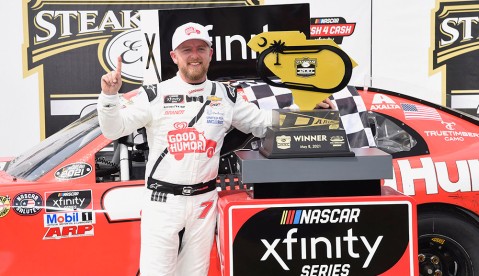 Justin earned $302,455 as his prize money in the year 2013 after appearing in just three events. The following season, He raced in thirty-four events and earned $3,987,525 as his earnings. In the 2015 seasons, Allgaier made $3,959,649 as his prize money while racing in thirty-six events. Justin is ranked among the top drivers in sports and must be making millions as his salary.

Justin is married to his longtime girlfriend, Ashley Allgaier. They walked down their wedding aisle in 2011. They are high school sweethearts and shared every up and down until getting married in 2011. They had a private wedding ceremony in their hometown, Spaulding. 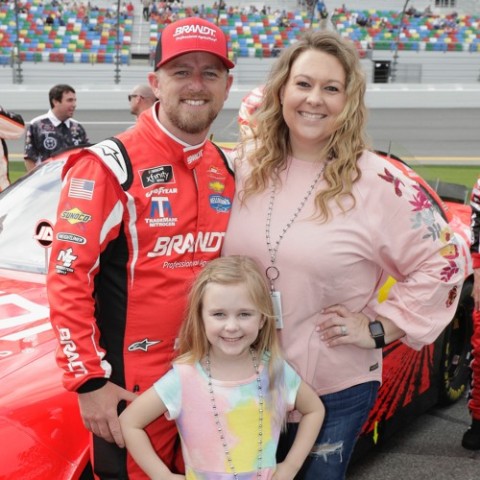 Justin shares a photo with his wife and daughter at an event SOURCE: The Block.

Shortly after the wedding, the duo welcomed their first child, Harper. The family of three extended to four with the birth of a second daughter, Willow. Justin and Ashley are living a happy married life. It's been more than a decade since their marriage, and there has been no rumor of the couple having ups and downs in their married life.

Allgaier won his first career pole in NASCAR at Memphis Motorsports Park. He finished the 2009 season, winning many Nationwide/Xfinity Series road course races. Since joining NASCAR Xfinity Series in 2010, Allgaier has raced in 364 events and won sixteen races. He won his last game at the 2021 Steakhouse Elite 200 held at Darlington.