John Hunter Nemechek is a rising American professional stock car racing driver. He has been racing at the professional level since 2012. John currently competes full-time in the NASCAR Camping World Truck Series, driving the No. 4 Toyota Tundra for Kyle Busch Motorsports. Hunter won 2014 All American 400.

John Hunter Nemechek was born on June 11, 1997, in Mooresville, North Carolina. He is the son of Joe Nemechek and his wife, Andrea Nemechek. His father is an American professional stock car racing driver who competes part-time in the NASCAR Xfinity Series. Hunter stands five feet and nine inches tall and weighs 68 kg.

John Hunter Nemechek has an estimated net worth of more than $3 Million. A stock car driver earns most of his net worth through his prize money from races and a huge sum through their annual salary. Also, They make a handsome amount through their sponsorship and advertising deals with numerous high-profile brands. 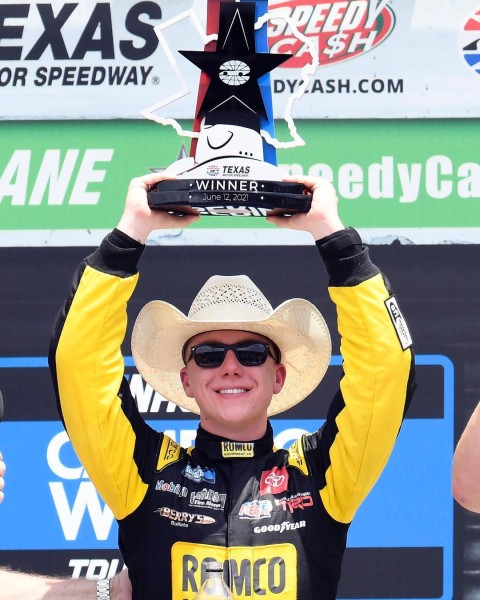 John shares a photo with his Title at Texas SOURCE: [email protected]

John has a sponsorship deal with Death Wish Coffee, Jayski, ROMCO, CITGARD, etc. Since 2016, NASCAR has banned sharing the salary and earnings of their drivers. Before that, Nemechek took home $15,995 as his income in the 2013 season. In the Following seasons, He earned $137,220 while playing in ten NASCAR events. In 2015, John made a total of $460,734 as his earnings from eighteen events.

The American racer is very much early in his career and will be making millions in the future. Also, His father raced for almost two decades and must have earned huge net worth to his name.

Yes, You read that right. John is already booked. Hunter is married to his longtime girlfriend, Taylor Nemechek, in October 2020. They had a private wedding ceremony where they had invited only a handful of outsiders, close friends, and family members from both sides. They had been seeing each other for several years before walking down their wedding aisle. 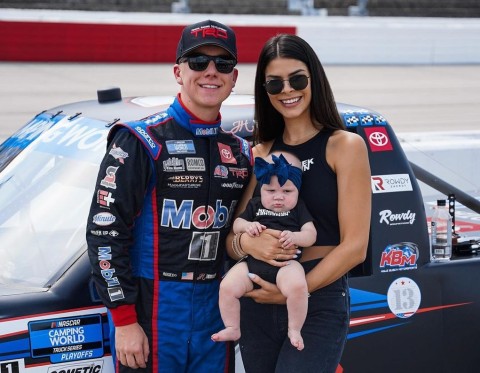 John shares a photo with his wife and daughter at an event SOURCE: [email protected]

In late December 2020, The couple opened about expecting their first child. On March 31, 2021, The duo welcomed their first child, Aspen Palmer Nemechek. John shared the news shortly after the birth through a post on his Instagram. The family of three is living a happy and blissful married life.

John started racing at the age of five. He used to attend numerous events alongside his dad and competed in go-karts, quarter midget. Nemechek made his debut competing in the 2010 Allison Legacy Series. In 2012, Hunter won his first major title at the 2012 Allison Legacy Series and praised Kyle Busch.

Hunter joined NASCAR Camping World Truck Series in 2012 and raced his first game in the 2012 Kroger 200. He won his first World Truck Series at the 2015 American Ethanol E15 225 held at Chicagoland. In 2017, Nemechek won back-to-back races at Gateway and Iowa. In 2018, John started to race in the NASCAR Cup Series and at the NASCAR Xfinity Series. He won his only NASCAR Xfinity series in 2018 at Kansas Lottery 300.