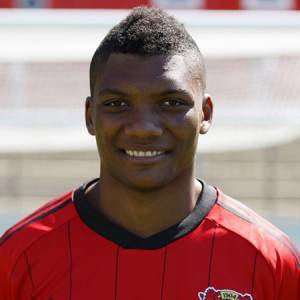 Junior Fernandes is a Chilean international professional player of Brazilian descent who currently plays as a center forward for Dinamo Zagreb. He has an estimated net worth of $0.5 million.The 78 numbered left footed player is proved to be the key player for his club.

The 78 numbered left footed player is proved to be the key player for his club.

Junior Fernandes was born on 4 October 1988 in Tocopilla with full name as Antenor Júnior Fernándes da, Silva Vitoria. Son of Brazilian parents, he moved from his native Tocopilla to Calama at the age of six. His mother's name is Lindu Fernandez.

Junior Fernandes made his professional dream debut representing Mejillones in 2007 and scored a hat trick in the game against Melipilla. He was in the club for three years where he earned 20 caps and scored two goals. He then moved to Palestine in 2011 which turned out to be lucky for him. His best performances in the club was scouted by Chilean international coach.

Junior Fernandes was then invited to Chile's U-25 national team.

He later moved to Universidad de Chile in On 2 December 2011 with the transfer fee of $ 700,000. He played for a season at the club and later decided to join the Bundesliga. He moved to the German side Bayer Leverkusen on On 6 July 2012. He stayed in the club for two seasons earning 6 caps and no goal.

Fernándes was seen with the national side from 2011 in the friendly matches.He made his official debut on 11 September 2012 in a qualifying match for the 2014 FIFA World Cup against Colombia. He was named in the preliminary squad for the 2015 Copa America but was omitted from the final squad.

As of 2017, Fernándes is again included in the Chilean National team and plays alongside star players like Alexis Sanchez, Arturo Vidal, Claudio Bravo, Esteban Paredes etc.

Junior Fernandes is married and has a daughter of about 3 years old. He is married to Marta Fernandes da Silva in June 2016. The couple seems to be enjoying their life with each other as they are seen often going for vacations. Recently, they were in Maldives to celebrate Marta's birthday.

Marta is a model and has huge followers on her Instagram. The couple dated for several years before getting married. He has the height of 1.83 m and weighs 77 kg.