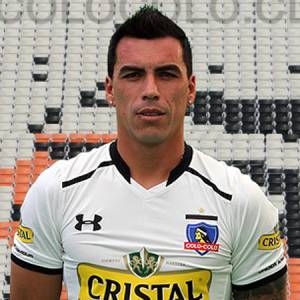 The professional footballer, Esteban Parades plays for the Chilean club Colo-Colo as forward in the Primera División de Chile.

Esteban was born under the full name Esteban Efrain Paredes Quintanilla on 1 August 1980 in Santiago, Chile. This versatile player holds a Chilean nationality. Born in the early August, his zodiac sign is Leo.

Esteban was born to Marianella Quintanilla is the name of his mother. He has not disclosed info about his father. He has a sister named Solange Paredes.

Since his childhood, Esteban had a deep interest in soccer and started playing at the age of 16 for Santiago Morning.

Later in 2009, Esteban was transferred to Colo-Colo with an appreciable lump of the transfer fee. In his first season with Colo-Colo, he scored 58 goals in 101 appearances.

Estaben was then transferred to Mexican club Atlante F.C, where he played for a season and kicked 17 goals in 30 appearances.

He then moved to Queretaro F.C where he scored six goals in 19 appearances.

Esteban made his second involvement for Colo-Colo in 2014 and scored 92 goals in 124 appearances.

Besides, Esteban has represented his nation Chile at the international level of football since 2006. Until now, he made his appearances twice in FIFA World Cup held in 2010 and 2014 and a Copa America in 2011.

Esteban Paredes is married and has two children with his wife. However, he is yet to reveal the details about his wife. He often spends time with his family, mostly with his children and shares snaps quite often.

Recently he posted a photo with his children having lunch in his club Cola-cola on his Instagram. He seems to be a good father as he manages enough time for his children. Besides, more information related to his married life, affair, the relationship is unavailable at present.

Despite the busiest schedule, Esteban has maintained a perfect balance between his personal and professional life.

This talented footballer has reached the age of 37 now. He has a good height of 5 feet 10 inch, which is around 1.78m.

The Chilean footballer Esteban has not experienced the taste of major clubs and only known for the domestic league. However, he has the experience of playing for several clubs in Chile.

Esteban current transfer fee is known to be to around $360 thousands and the highest recorded fee is $1.8 million when he transferred to Colo Colo Atlante in 2012.

Esteban is at the end of football career as he is already 37 years old. As a result, he might have the salary below average than the other Chilean league players.

Esteban has his own vehicle probably a car for riding and quite a comfortable life at present.