Julian Gressel is a German professional footballer who is currently signed to D.C, United Of the Major League Soccer (MLS). The midfielder previously played for the TSV Neustadt/Aisch, Eintracht Bamberg, and Atlanta United.

Born on 16th December 1993, Julian Gressel started his footballing career at the youth academy systems of 2. Bundesliga side, SpVgg Greuther Fürth in 2002 and later switched to the academy set-up of Quelle Furth. Moreover, after high school, he played for his college team Providence Friars (2013-2016).

Julian Gressel's salary for the 2020 season is $132,999 from the MLS side, DC United. Earlier, he played for the Atlanta United.

Besides, endorsement plays a vital role in his revenue. Currently, the footballer is endorsed by Adidas, Upgrade, and Rest Smart Bed. As of 2020, his net worth is $0.2 million. What's more, Julian owns a Mercedes.

Julian Gressel is married to his college sweetheart, Casey Gressel. The couple tied the knot in December 2018, in Boca Raton, Florida, the same month, he became MLS champion. The couple got engaged in December 2017. Also, the couple has a pet and a proud parent of that doggy. Scrolling through Julian's Instagram, one can find various pictures of the duo. 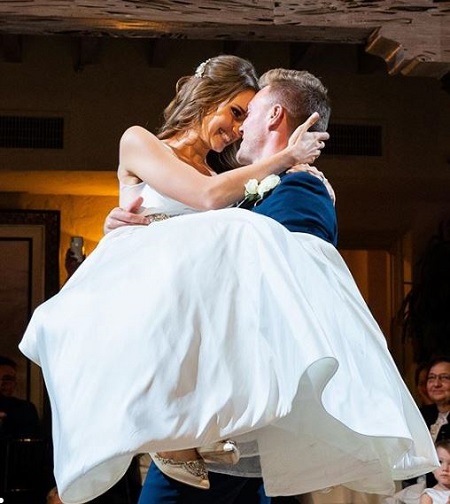 To date, there is no news and rumors regarding conflict, extramarital affairs, and divorce. The duo is living a blissful life.

Neustadt, Germany native, Julian Gressel is the son of Barbara Gressel and Holger Gressel and has two brothers. Football surrounded him growing up in Neustadt an der Aisch, a small town in the northern part of Bavaria. His father played for TSV Neustadt/Aisch, an amateur team that Gressel's grandfather managed.

On 13th January 2017, Gressel was picked by the Atlanta United FC in the first round with the 8th overall pick. On 5h March 2017, he made his professional debut in a 1-2 loss against New York Red Bulls. Furthermore, he was awarded the MLS Rookie of the Year honors. Overall, he played 98 competitive games with 15 goals for the Atlanta United.

On 21st January 2020, Gressel was acquired to D.C, United for $750K in Targeted Allocation Money, and joined the team alongside Joseph Mora and Frederic Brillant. On 29th February 2020, he made his debut in the season opener against the Colorado Rapids.