A native of Argentina, Julian Alvarez is a professional footballer who plays for Premier League club Manchester City and the Argentina national team. Being a football forward, he plays as a striker, but he can also perform great as a winger.

Since 2014, Alvarez has been playing football and has represented his current club, Manchester City, since joining them on January 31, 2022. For your information, Alvarez was the South American Footballer of the Year in 2021 and was also the Argentine Primera División top scorer in 2021, scoring 18 goals.

Alvarez, aka The Spider, currently plays for Man City, and his deal with the team is a whopping £14.1 million. Talking more about his earnings, Alvarez is contractually paid up to a total annual payment of about £2.6 million. Taking this point, Bola VIP reports that Alvarez earns £216,000 per month or £50,000 weekly. So, it becomes clear that Alvarez is doing pretty well in his career and is also making a good amount of money. According to Transfermrkt, Alvarez's market value is €28.00m, and it can be said that his worth will increase in the future as Alvarez is still playing football actively.

Who Is Alvarez Dating Now?

According to some online sources, Alvarez is currently in a relationship with his girlfriend, who goes by the name Maria Emilia. Their relationship news first came into the media when Emilia posted an image holding hands with Alvarez on her Instagram handle on September 2022. The photo was taken in Spain, which left everyone surprised. Apart from that, the footballer prefers to stay lowkey and keeps his personal matter away from the media. So, there is significantly less info about his love life.

Alvarez came into this field in 2014 when he joined Atletico Calchin. He played with the team until 2016 and moved to play with River Plate. He also participated in the Generation Adidas Cup with the club's youth teams. Coming into his international career, Alvarez plays for the national football team of Argentina. Before making his debut for the senior team on June 3, 2021, he also played for the U20 and U23 teams.

You May Read: Gaston Avila

Alvarez Has a Happy Family – His Parents & Siblings

Julian Alvarez was born on January 31, 2000, in Cordoba, Argentina. So, Alvarez holds an Argentine nationality and peaks at an average height of 5 feet 7 inches (1.70 m). Meanwhile, the footballer was raised by his loving parents named, Mariana Alvarez (mother) and Gustavo Alvarez (father). 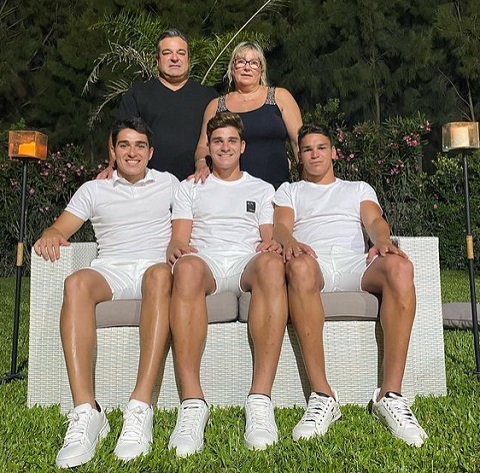 Julian Alvarez with his brothers and parents  SOURCE: Instagram @juliaanalvarez

Furthermore, Alvarez grew up along with his two siblings; both brothers named Raphael Alvarez and Agu Alvarez. Alvarez is a family man who loves spending time with his parents and siblings in his spare time. From his IG account registered as @juliaanalvarez, he often posts images with them.