Judy Ann Battista is a famous sportscaster currently working for NFL.com and specializes mainly in professional football. She was the reporter who asked a question of then-New York Jets Head Coach Herm Edwards when Edwards launched into his monologue about how "you play to win the game".

Judy Ann Battista reportedly earns around $3 6,700 as her yearly salary from the network. However, her net worth is yet to be reviewed. She is married to a fellow sports reporter, Anthony Patrick McCarron.

Judy Ann Battista was born on March 10, 1966, to Anthony Battista and Joan Battista. She was raised in South Florida and holds an American nationality. Further, her zodiac sign is Pisces.

Judy Ann Battista joined the University of Miami and acquired her Bachelor's degree in Journalism and Political Science.

Since Judy Ann Battista has always enjoyed writing along with keeping up on the news, she became interested in journalism.  Further, she enjoyed reading the paper and watching the news in her free time. She started working for the Miami Herald as a local news reporter in 1990, switching to sports in 1992. 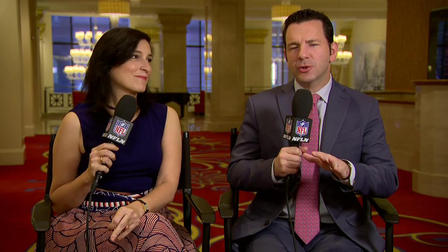 She later joined NFL.com in August 2013 where she covers mainly about professional football. As an NFL.com reporter, Battista writes stories for NFL.com and appears on NFL Network programming.

Judy is married to a fellow sports reporter, Anthony Patrick McCarron who works for The Daily News. The couple got married in 2011  at the Lotos Club in New York. The couple is living a happy married life ever since.

Judy Battista Net worth and Salary

The American sports reporter Judy Ann Battista receives an annual salary of $36,700 dollars from her successful reporting career with NFL.com. However, her net worth is yet to be reviewed.

Other than being a successful reporter, Judy is quite famous in social media. She has 57k followers on Twitter.