Gossip American Sportscaster Heidi Watney is Married to Mike Wickham. Know about her Married Life and Past Affairs

American Sportscaster Heidi Watney is Married to Mike Wickham. Know about her Married Life and Past Affairs

Heidi Watney, an extremely talented American Sportscaster better known for her incredible presentation. She is also in the limelight for her married life with her husband Mike Wickham. The 36-year-old sportscaster currently serves as a host and reporter for the MLB  Network.

Besides having many controversial affairs in the past, it seems like Heidi has now set the path to the relationship goals with her loyal husband Mike. The lovely couple is yet to become parents but seems the day for the welcome of their new baby is not so far, as Heidi is reported to be pregnant.

Let's get the details about Heidi Watney married life, her relationships, affairs, and pregnancy.

Blessed with talent and beauty, Heidi has not talked much about her love relationship. Though she was rumored to have affair many celebrities in the past, none of the relationships issues resulted permanently until Mike came into her life.

Well, Mike is the director of Miami Marlins LLC since 2010, and prior to that, he used to work as an assistant director for San Diego Padres. Even though Mike is said to be Heidi's longtime boyfriend, the exact date of Mike and Heid's relationship beginning is not out yet.

Probably, the share of the same field set up Heidi's love story. 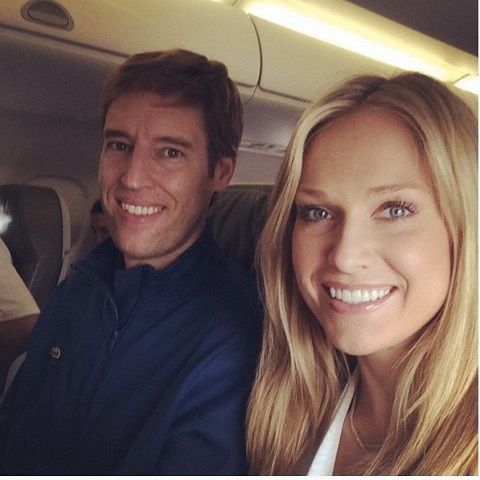 For everyone New Year's Eve is special and many of us promises to have a new start. And the New Year eve of 2015 was proved to be very much special for Heidi and Mike.

Yeah, you guessed that right, Heidi and Mike got married on December 31, 2015, on a beach themed wedding. However, the detail of the guest list and ceremony is not disclosed.

At the beginning of 2016, Hedi shared her memorable moments of 2105 on her Instagram.

Soon after their marriage, Heidi and Mike went to Bora Bora, for their honeymoon. The couple even shared the post of their romantic dinner at the small South Pacific island,  northwest of Tahiti in French Polynesia.

Happily married couple, Heidi and Mike are still going strong in their relationship and can be seen displaying lots of love to each other on social media. On their 1 year anniversary, Heidi shared a tweet describing her unlimited happiness to have such a wonderful husband as Mike.

I can't believe this was one year ago! Happy Anniversary to my wonderful husband @mwickham25.… https://t.co/KLghs7k49a

And in 2017, the second year of their anniversary, Heidi shared an Instagram post which displayed the flashback of their wedding. Really love never gets old, the love of this lovely duo is growing stronger over time.

This perfect day 2 years ago was just the beginning. There is nobody I would rather be on this journey of life with than this man. Happy anniversary @mwickham25! ???

It's true that it is not quite easy to maintain a balance between personal and professional life, and for the celebrities, it gets even tougher. Well, Heidi and Mike both are busy with their tight schedule, however, they somehow managed to give time to each other and their family.

Understanding and time strengthen the love, so even after these years, no mishaps of separation or divorce is able to touch the happiness of the lovely couple, Mike and Heidi.

Let's take a close look at the couple's lovely moments.

Fun on the links with @mwickham25 and Sam Ryan! At Seawane Country Club for @RonDarlingFoundation!

Happy birthday to my partner in life! Nothing like a trip to the Cayman Islands to kick off what is sure to be a great year! #babymoon #birthdaytrip #getoutofthecold #lasttripasafamilyof2 #weregonnabeparents

Well, it's been more than 2 years since the marriage of Heidi and Mike, and till now they have not become parents. But the day is coming soon, as Heidi is reported to be pregnant.

Scroll down for details.

The happy news of the arrival of a new member in the family member knocked on the door of Mike and Heidi. Yeah, the couple is now a proud parent of a lovely son Jax.

Heidi's pregnancy news hit the limelight a little later after she first shared it with her family members and close relatives.

My husband and I are very #Thankful that we are expecting our first child in April. #HappyThanksgiving #GodBless pic.twitter.com/ElbLW5vrX6

The issue became official after she shared the photo of her baby bump on her Instagram while on a get-together with her friends on Christmas i.e. on December 25, 2017. Have a look.

My girls! Another wonderful year of friendship, memories, love and lots of laughs for this crew I grew up with! #foreverfriends?? #startedinjuniorhigh #ChristmasParty #loveandlaughter #judgefreezone #CW99 #Fresyes #thecruisers

Surfing her Instagram, we saw that she went to San Diego for her babymoon. She even shared the photo of the gifts from her family in the baby shower.

What an amazing baby shower from my awesome family! Thank you Nancy, Sara & Carlee, and the rest of the Fischer clan for such a wonderful day! #newestaddition #babyboy?? #family #love

What a great night at the “In the Spirit of the Game” celebration to support the #MLB Scouts Foundation! #verypregnant #redcarpetmaternitystyle Thank you @ktalk717 for the dress! ??

After Heidi returned back to New York from San Diego, she got the amazing visit by fellow Sportscasters and TV personalities like Sam Ryan, Lauren Shehadi, and Kelly Nash congratulating her on the baby shower.

Thank you to all the amazing women for making my baby shower so special... especially @laurenshehadi, Nicole, @samryansports @michellelvero @kellynash ! You know how to make a girl feel loved! And thank you to everyone who came! I am so lucky to know and work with such great people!

Heidi and her husband now have a lovely son named Jax and the couple also owns a lovely dog.

A little late but I’ve been chasing a #10monthold around! Baby Jax is a lightening fast army crawler. His latest hobbies include trying to get to Yogi’s dog food before being blocked, pulling himself up on everything and trying to climb the stairs. #havetobefasterthanmommy #angelbaby #mylove #firstwordwasmama #soimtoldiwasnotthere #aboyandhisdog

The couple seems happy with their lives and so far no rumors or controversy regarding their divorce or any of these two having an extramarital affair is out.

While covering the news for the Red Sox from 2008 to 2001, Heidi was rumored of having a relationship with then-American baseball catcher Jason Varitek. The news surfaced after Heidi and Jason were reported to be seen in an intimate conversation. 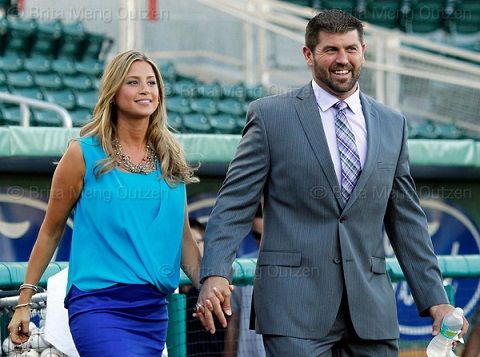 Jason Varitek and his wife Catherine Panagiotopoulos [ SOURCE: A View From The Pit ]

Then again in 2012, the rumor of a secret relationship of Heidi and Jason rose again which was given a dead shot by Catherine, speaking on the defense of Heidi.  Red Sox replaced Heidi Heidi with Jenny Dell on the sideline after the controversy.

Well, besides this, back in 2009, Heidi was rumored to be in a relationship with infielder Nick Green, however, the rumor got buried shortly.

Despite the rumors, Heidi is currently living her life to the fullest with her loveable husband Mike and is soon going to be a mom.