Jude Victor William Bellingham simply known, Jude Bellingham is an English professional footballer who is currently signed to the Championship club Birmingham City. At the time of his senior debut in August 2019, Bellingham was 16 years old and 38 days, becoming the club's youngest ever first player. Reportedly, he will join Bundesliga club Borussia Dortmund following Birmingham's last match of the season.

Stourbridge, England native, Jude Bellingham was born on 29th June 2003, under the star sign Cancer. The seventeen yaers old is an English by nationality who came from the Afro-American ethnic background.

How Much Is Jude Bellingham Net Worth? Know His Salary & Market value

Currently, Jude is playing for Birmingham City where he is earning a decent sum of money as salary. The details regarding his salary are yet to disclose. As reported, he is set to earn up to £100,000 weekly wage after he starts with a new club. 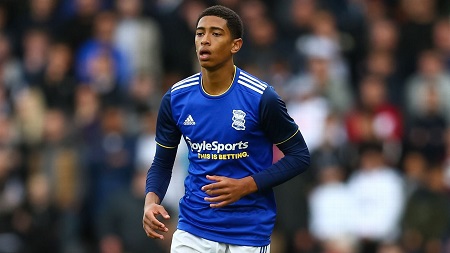 Apart, endorsement deals has a huge impact on footballers' revenue so do Bellingham. He is endorsed by Adidas. As of 2020, his net worth is under review.

No. 22 Birmingham City's, Jude Bellingham is not open regarding his love life. Maybe he is more focused on his career rather than involving in a romantic relationship which may be the reason there is no news regarding his girlfriend. As of now, he is single.

Moreover, Bellingham is active on Instagram with 157k followers. On social, he only posts regarding his football.

Jude Bellingham is one of two sons born to Mark Bellingham, a sergeant in the West Midlands Police and prolific goalscorer in non-League football. He has a younger brother, Jobe, who is a member of Birmingham City F.C.'s academy. Bellingham attended Priory School in Edgbaston, Birmingham.

As an under-8, Jude joined Birmingham City where he played for their U-18 team at 14 years old. At the age of 15, he made his debut for their U-23 team away to Nottingham Forest's U23s on 15th October 2018. While still a schoolboy, he was introduced to the first-team environment. In July 2019, he took up a two-year scholarship with Birmingham City to started. For the 2019-20 season, he was given shirt No. 22.

In January 2020, he was linked with moved to various major clubs, on deadline day, Birmingham was reported to have turned down a £20 million bid from Manchester United. At the end of the 2020 season, he had long become clear that Bellingham would leave. As reported, Manchester United and Bundesliga club Borussia Dortmund were the favorites.

On 16 July 2020, he flew to Germany for a medical with Borussia Dortmund, hence, the transfer was confirmed. However, the fee was undisclosed but was understood by Sky Sports to be an original £25 million making him the most expensive 17-year-old in history. Thorgan Hazard, Marco Reus, and Raphael Guerreiro are the famous players for the Borussia Dortmund.