Luke David Gambin, a.k.a. Luke Gambin is a professional footballer who is currently signed to the League Two club Colchester United as well as the Malta national team. Earlier, the winger played for the club like Barnel, Hemel Hempstead Town, Hendon, Luton Town, and Crawley Town.

Sutton, London native, Luke Gambin, was born on 16 March 1993, under the star sign Pisces. The twenty-seven years old holds an English nationality and is of Maltese descent. He stands 5 ft 6 in (1.68 m) tall and weighs 70 kg.

Throughout Gambins's decade long sucessful football career, he has summoned a tremendous sum of money. As of 2020, his net worth is approximately $1 million. 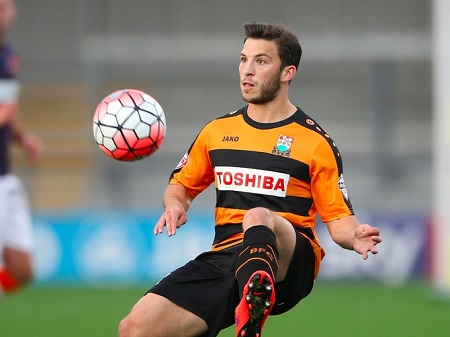 He is currently playing for the League Two side, Colchester United. As reported, the average weekly salary at League Two is £1100. This season Gambin will possibly make over £60,000. Besides, he receives a decent sum through as a salary from the Malta national team, where he has been capped 24 times since 2016.

With the current market value of €200,000, Luke Gambin is ranked number 13 among all players from Malta.

Gambin's personal life is under the shade. Colchester United's winger is believed to be single as there is no information available regarding his affair or girlfriend. Additionally, he is nowhere to be found on socials such as Instagram, Twitter, and Facebook.

Growing up in Sutton, Luke spent hours in the garden with his older brother kicking a ball about after school every night before being called in for our dinner or playing in the junior leagues.

If not a footballer, he would probably work for his dad's bakery and cafe. When he was younger, he used to spend my summers loading up the dishwasher.

Further, his eligibility for Malta comes through his grandparents on his father's side of the family.

Gambin began his career in the youth system at AFC Wimbledon and moved to Barnet in 2009. In 2011, he was promoted to the senior team, where he would spend seven years of his career, appearing in 124 games with 15 goals. During his time at Barnet, he also had a loan spell with Hemel Hempstead Town (2011-2012) and Hendon (2012).