Josh Teater is a well-known American professional golf player. He is currently playing under the PGA Tour events. Teater turned professional in 2001. He started his professional career playing in the Web.com Tour. Josh has won just one professional event at the Korn Ferry Tour.

Josh Teater was born on April 6, 1979, in Danville, Kentucky. He is the son of Donna Rhodus and her husband. Teater is very much private concerning his personal life and his family. After graduating from High School, Josh enrolled at Morehead State University. Talking about his physical appearance, Teater stands five feet and ten inches tall.

Josh Teater's Net Worth and Earnings

Josh Teater has an estimated net worth of more than $5 Million. The American golf player has earned much of his net worth as his prize money, bonus, and sponsorships deal with numerous brands. Teater has played in twelve PGA events and earned $152,203 as his prize money in the ongoing season of 2021. Josh took home $453,508 when he appeared in fifteen PGA events last season.

Josh is a married man living a happy married life. He is very much open about his married life in public. Teater tied his wedding knot with his longtime girlfriend, Ashley Bell, on March 2, 2013, in Lexington, Kentucky. They had been dating each other for several years before their marriage. Ashley played basketball for the Wayne State University and was inducted into the Hall of Fame. 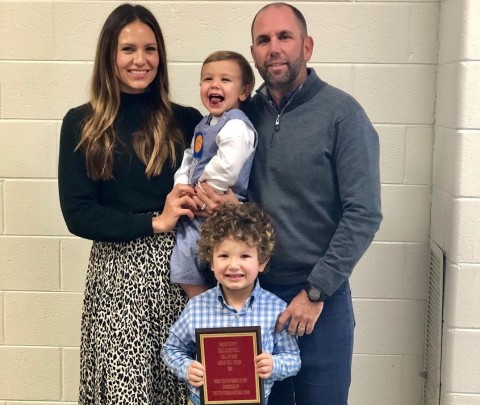 Josh shares a photo with his wife and their children at an event SOURCE: [email protected]

Josh and Ashley are the proud parents of two children. Josh keeps taking his children to attend his games but has not shared their names and ages.

Josh was part of his High School golf team, and upon enrolling at the Morehead State University, He played golf for the university team. Teater won one collegiate title. Josh turned professional right after graduating from the University in 2001. He started his professional career playing in the mini-tours and Web.com tours. Josh played in the league until 2009 and joined the PGA.

In 2009, Josh won his first professional title at the Utah Championship of the Nationwide Tour. Although It's been more than a decade of Teater playing in the PGA event, He has finished second in one event in the 2019 season but is yet to register his first title.