Hunter Mahan is a well-known American professional golf player. He has been playing in the professional league for almost two decades. Mahan currently plays under PGA Tour. He started his professional career in 2003. Hunter has won eleven professional events, including six PGA Tour, two European Tour, and three others.

Hunter Mahan was born Hunter Myles Mahan on May 17, 1982, in Orange, California. He is the only child born to Cindy Mahan and her husband, Monte Mahan. His father is a former undercover police officer in Southern California. Hunter excelled in soccer and karate before being introduced to golf by his father. He graduated from McKinney High School and enrolled at the University of Southern California. Mahan stands five feet and eleven inches tall and weighs over 79 kgs.

Hunter Mahan has an estimated net worth of more than $30 Million. A golf player does not need to win an event to receive prize money; They are paid based on their score at the end of the series. Hunter must be making millions of dollars from his sponsors like under armor, Titleist, Ping, NetJets, FootJoy, etc. . Mahan is ranked at No. 41 on the All-time Money list. His friend, Kevin Streelman, is at No.74 with a net worth of more than $22 Million.

Since the 2006/7 season, Mahan's earning did not drop below two million each season until 2013/14. In the 2011/12 season, Hunter took home $4,019,193 from twenty-three events in which he won two events, and the earning remains as his highest-earning in a single season to date.

Who is Hunter Mahan Married To? Know About His Wife

Hunter Mahan married his longtime girlfriend, Kandi Harris. The love birds tied their wedding knot in a private wedding ceremony on January 15, 2011, at Pissa in the Village. They first met each other in 2010 on a blind date. The couple instantly became a pair, and Kandi began to accompany her beau on tour worldwide. In 2010, Mahan proposed Kandi with a stunning 6.2 carat oval diamond with trillion diamonds on each side of the center stone. 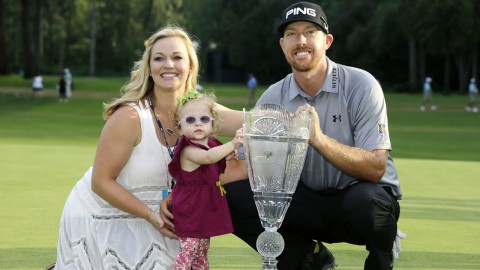 Hunter shares a photo with his wife and daughter SOURCE: Golf Weekly

Shortly after the wedding, Hunter and Kandi welcomed their only child, a daughter Zoe. The family of three is living a happy life. Hunter keeps taking his family to his games regularly. After the death of his sister-in-law, Hunter and Kandi have adopted her two kids.

Mahan turned professional in 2003, right after graduating from the University. he made his PGA debut in the 2004 season. It took him three seasons to win his first PGA Tour title. He won the 2007 Travelers Championship and entered into the top 100 World Golf Ranking. In 2010, Hunter won his second PGA Tour Title at Waste Management Phoenix Open, beating Rickie Fowler. He won his third title the same year at the WGC-Bridgestone Invitational, beating Ryan Palmer.

In 2012, Hunter won his fourth at the WGC-Accenture Match Play Championship. He won his last title the same year at  Shell Houston Open and peaked his career ranking at no. Four. Since then, Hunter has not been able to give his best in the game.