D.A. Points Aka Darren Andrew Points is a well-known American professional golf player. He is currently playing in the PGA Tour. Darren started his professional career in 1999 and played in the Web.com Tour. Points has already won seven professional events, including four Korn Ferry tours and three PGA tours.

Darren Andrew Points was born on December 1, 1976, in Pekin, Illinois. He is the son of Steve Points and his wife, Mary Jo Points. Darren graduated from Pekin High School and played golf for the University of Illinois. Points won the Illinois State Amateur Championship in 1995, 1998, and 1999. Andrew stands six feet and one inch tall and weighs 88 kg.

How Rich is D.A Points? Know About His Net Worth and Earnings

D.A Points has an estimated net worth of more than $10 Million. Points has been playing in the professional league for more than two decades and has earned most through PGA Tour events. In the ongoing season of 2021, Andrew has earned just $26,865 from fourteen events. Last season, He appeared in just six events and did not earn official money. 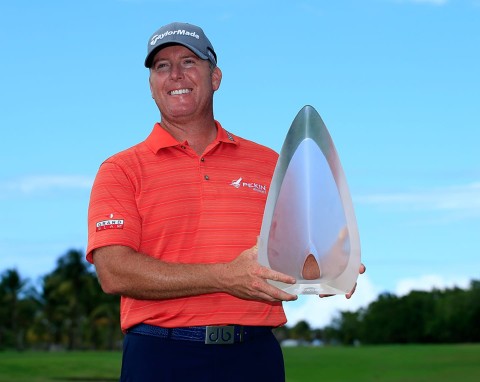 Darren is married to his longtime girlfriend, Lori Points. They had a private wedding ceremony in the early 200s. Much about their wedding is still under the radar. Unlike other golf players, Points does not show much presence in social media and has successfully kept his personal life away.

Following his Twitter handle, we can be sure that Points is the proud father of two children, a son, and a daughter. The family of four is living a happy life.

Darren lost the 1996 U.S Amatuer in the quarterfinals to Tiger Woods. He turned professional in 1999, right after graduating from the University. Andrew played in the Web.com Tour until 2004 and earned his PGA Tour card by finishing second on the Nationwide Tour money list in 2004. He won his first title at the Empire Open in 2001.

After making his PGA debut in 2005, Darren waited until 2011 to win his first PGA title at the At&T Pebble Beach National Pro-Am against Hunter Mahan. In 2013, He won his second title at Shell Houston Open and third in 2017 at Puerto Rico Open. Points reached No.45 in the World golf ranking in May 2013, which remains his highest ranking.