If you love watching golf then, Lucas Glover must not be a new name. Lucas is a well-known American professional golf player. He has been playing professional golf since 2001. He has won six major tournaments to date. He is best known for winning the 2009 U.S Open. Glover has played more than 430 events in his two-decades-long career.

Lucas Glover was born Lucas Hendley Glover on November 12, 1979, in Greenville, South Carolina. Lucas is the only child born to Ron Musselman and his former wife, Hershey Hendley. His father is a well-known MLB player. His parents separated soon after the birth of Lucas. Hershey married Jim Glover and moved with her son, Lucas. Lucas graduated from Wade Hampton High School and enrolled at Clemson University.

As of April 2022, Glover's career earnings is reported $26,752,417. Lucas Glover has an estimated net worth of more than $20 Million. He has accumulated this huge net worth through his successful two-decades-long career with golf. Lucas ranks at number 62 in the list of all-time money leaders in Golf with a total of $24,004,944 in 2020. Glover earned $6,180 in the very first year of his professional career. 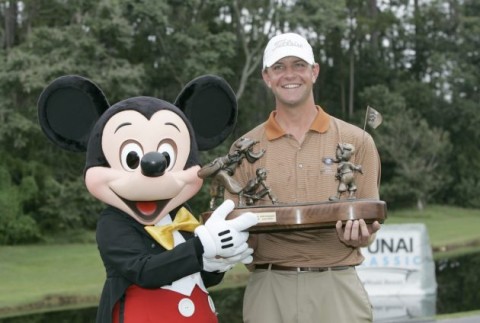 Glover earned more than $2 Million in the 2004/5 season when he played 28 evens, won a tour and made cut-outs in 16 events. In the 2008/9 season, The golf player earned $3.6 Million, which remains the highest earning for him in a single season to date. He has made the most from Wells Fargo Championship with $2.6 Million and U.S Open with $1.5 Million.

Lucas must have earned a reasonable sum through his endorsement, sponsorship deals. In 2009, He signed a one-year endorsement deal with ARGOLF. In 2019, the contract was renewed, and as per their agreement, Glover would carry an ARTHUR blade putter in his bag for the 2019 PGA Tour season.

Glover is living a happy married life. He is married to his longtime girlfriend, Krista Glover. The love birds tied their wedding knot in 2012 at a private wedding ceremony. Krista is a model and is very much early in her career. Soon after the wedding, Lucas and Krista welcomed their first child, Cille. 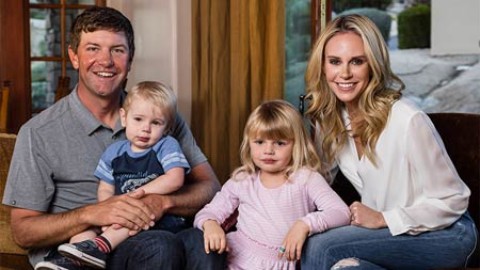 Lucas Glover with his wife and children SOURCE: Black Sports

In 2017, The family of three extended to four after the duo had their second child, Luc. Lucas remains out of the house for his training and games, so Krista remains at home looking after their children. In 2018, Krista was charged with battery and resisting an officer and is also believed to have been involved with domestic abuse cases towards Lucas and his mother.

Glover won several Amateur titles in his early days. He turned professional in 2001 after graduating from Clemson.  He earned $64,692 and finished 67th on the money list. In 2005, Lucas won his first PGA Tour at the FUNAI Classic at the Walt Disney World Resort. In 2009, The U.S Open was one of the biggest titles of Glover's career.

In 2011, The golf player won his third PGA Tour and suffered a knee injury in 2012. He took some time off the game and returned in 2015. However, Glover has not won significant tours since he has been consistent with the game and earned a reasonable sum through his plays. He was ranked at 15 in 2009, which remains the highest-ranking for Lucas.