Joshua Bynes, simply known as Josh Bynes is an American football linebacker who is currently signed to the Cincinnati Bengals of the National Football League (NFL). He finished his collegiate career at Auburn and was signed by the Baltimore Ravens as an undrafted free agent in 2011. He has also played for the Detroit Lions and Arizona Cardinals.

Fort Lauderdale, Florida native, Josh Bynes was born on 24th August 1989, under the star sign Virgo. The thirty years old is an American by nationality who belongs to the African ethnic background. Regarding his physiques,  he stands 6 ft 1 in (1.85 m) tall and weighs 235 lb (107 kg).

How Much Is Josh Bynes Net Worth? Contract, NFL Career Earning, & Salary

Josh Bynes is a married man. He exchanged the vows with his long-time girlfriend, Briana Bynes, on 6th April 2014, in an intimate ceremony. 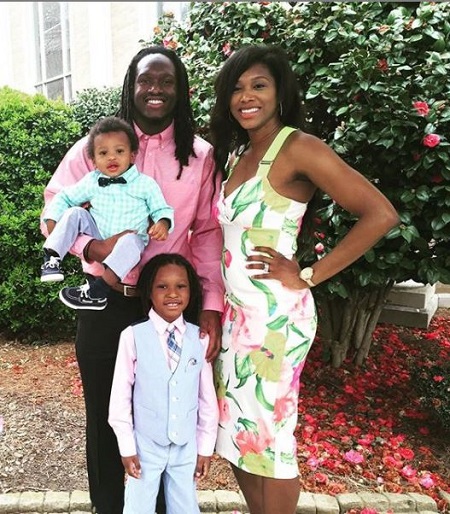 On 20th February 2020, the couple welcomed their third child, a son, Jordy Hayes Bynes. Before the couple had two sons. Their family pictures can be seen on Bynes official Instagram account.

Josh Bynes is the son of Herbert Bynes and Yolanda Bynes. His brother, Herb Jr was also a quarterback at Hampton University. Upon his high school graduation, he went to college at Auburn where he garnered Second Team All-SEC honors as a senior.

After going undrafted in the 2011 NFL Draft, Bynes was signed by the Baltimore Ravens as an undrafted free agent. On 16th April 2012, he agreed on a one-year extension contract with Ravens. After that, he had two more 1-year contracts and played for the team 2014.

Moreover, he played two seasons for the Detroit Lions (2014-2016). On 5th August 2017, the Arizona Cardinals signed Byne. On 13th March 2018, he signed a three-year extension contract with Cardinals but was released on 5th March 2019. That year on 2nd October, he was signed by the Baltimore Ravens and played the remaining season with the team.

On 25th March 2020, the Cincinnati Bengals signed him to a one-year contract.