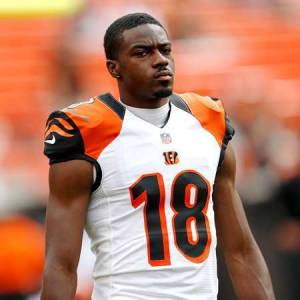 A. J. Green is the Wide Receiver for the Cincinnati Bengals of the National Football League (NFL), who is currently playing his 5th season at Cincinnati Bengals. During his rookie season, A.J had 7 touchdowns and 1,000 receiving yards granting him his spot in the 2011 PRO Bowl. Born in July, 31, 1988 in Summerville, South Carolina of United States, A.J Green was the youngest son to Woodrow and Dora Green. His Full name is Adriel Jeremiah and Birth sign is LEO. His mother used to work as a clerk at a Wal-Mart and his father was a steel worker and truck driver. He had older brother Avionce, who died in a tragic car wreck when A.J. was at the age of 5 and that wreck also left his aunt paralyzed.

During his elementary school, Green learned how to juggle. He revealed the fact in an interview for the Atlanta Journal-Constitution that, “he could juggle as many as four items at once, and it helped him regarding development of his hand-eye coordination".

A.J attended the Summerville High school where he rediscovered himself as an athlete in three different sport football, basketball and track. Under the coach John MCKissick, Green played as a wide receiver for Summerville Green Ware High School football team. His performance in the year 2008 put in the position of TOP national football prospect of the year and sports illustrated listed him as #1 that year.

With the performance of following 75 receptions for 1,422 yards and 16 touchdowns in sophomore season, he earned ALL-State honors for four times and he became the only junior to be nominated in the 2006 USA Today All-American First Team.

During his high school career, he conquered 5,373 receiving yards rank second in the all-time career receiving records of the National Federation of High Schools and his 279 career receptions rank fourth on that same list.  Later on, Rivals.com did a few articles on Green and ranked him as their #9 prospect going into college.

Green and Miranda Brooker started dating from 2010. His Girlfriend Miranda Brooker is a singer with the famous track I am a hater. Green posted numerous pictures during their dating in his official instagram account. Green often gave an impression that he is serious regarding Miranda Brooker and they both want to acknowledge each other in a very positive way possible.

A.J. dated the Miranda Brooker, singer (of the track, I am a hater) for about 5 years. In March 21, 2015, their Wedding ceremony was held in Atlanta’s luxurious 200 Peachtree venues with the attendance of Andy Dalton, Mohamed Sanu, Marvin Jones and Carlos Dunlap.

A.J. has never seen or acknowledged in any other relationship publicly before Miranda or after her. He is not involved in any kind of extra marital affairs.

In 2010, Green was suspended for the first four games regular season of 2010. He admitted to that he sold his 2009 Independence Bowl Jersey for $1,000 to former North Carolina defensive back Chris Hawkins, who as NCAA described as an agent who markets amateur athletes. As part of his punishment, Green was required to repay $1,000 to a charity.