Gene Reynard Atkins Jr. a.k.a. Geno Atkins is a professional American football defensive tackle who is signed to the Cincinnati Bengals of the National Football League (NFL). He finished his collegiate career at Georgia ans was picked by the Bengals in the 2010 NFL Draft in the fourth round. Furthermore, he has been selected to the First Team All-Pro as well as is an eight-time Pro Bowler.

How Much Is Geno Atkins' Net Worth In 2020? Contract, Salary, & NFL Career Earning

Atkins is married to his college sweetheart, Kristen Merritt. The couple tied the knot on 25th June 2016 at the St. Regis hotel in Buckhead, Georgia. In February 2019, the couple welcomed their son, Geno III. Now, the couple is expecting their second child, a daughter. 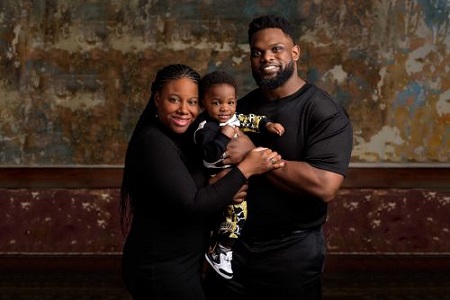 Atkins and his spouse, Kristen are helping provide food to families in need amid the COVID-19 pandemic with $100K donation to Freestore Foodbank.

Atkins was born to, Gene Atkins, a former American football safety who played in the NFL for New Orleans Saints (1987-1993) and Miami Dolphins (1994-1996) and mother, Sandra Atkins. For high school, he enrolled at St. Thomas Aquinas in Fort Lauderdale where he helped his school team to be the Class 5A runners-up in both 2004 and 2005. Moreover, he played college football at the University of Georgia.

In the 2010 NFL Draft, Geno was selected by the Cincinnati Bengals in the 4th round with 120th overall pick, becoming the 12th defensive tackle picked that year. On 16th July 2010, he inked his first professional contract with Bengals. Further, he made his professional regular-season debut in the team's season-opening 38-24 loss at the New England Patriots and is playing for the team since then. His popular teammates include Joe Burrow and A.J. Green.