Joseph Ossai is an American football player who is drafted by the Cincinnati Bengals of the National Football League (NFL) in the 2021 Draft. He was picked 69th in round three. He finished his collegiate career at Texas.

Lagos, Nigeria native, Joseph Ossai was born on 13th April 2000, under the star sign Aries. The son of Vitus and Emmanuela Ossai, Joseph has a sister Peace, and brothers  Philip, KC, and Emmanuel. The family moved to  Conroe, Texas, in the United States, when he turned 10.

How Much Is Joseph Ossai's Net Worth In 2021? Salary & Contract

As per Cincinnati Bengals rooster status, Joseph Ossai is an unsigned draft pick. However, if signed the 69th pick will have four years $5,192,620 contract. For sure Ossai will have that multi-millionaire contract and earn that tremendous sum.

Scrolling through his Instagram, he is sponsored by Six Star Pronutrition. As of 2021, Joseph Ossai's net worth is under review.

There is no information about Joseph Ossai having a girlfriend. His love life is under the shade. Nevertheless, on 8th May 2018, he shared his prom pictures where he appeared with a gorgeous lady, JeanMarie Kmetz. He captioned the post, "Everything about this night was perfect sorry it took me so long to post these. Couldn't have picked anyone better for this occasion." 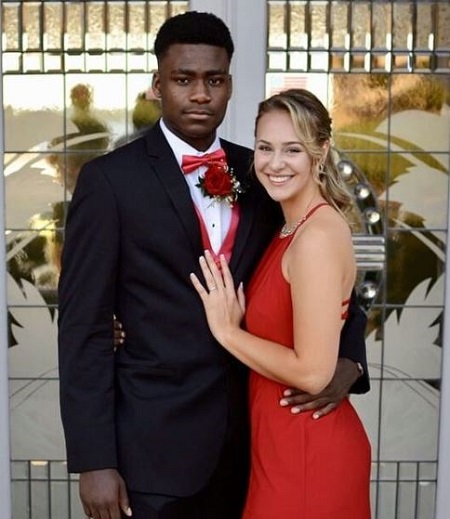 And that is the only post featuring a lady on his Instagram. For now, the No. 58 – Cincinnati Bengals defensive end is believed to be single.

Enrolled at Oak Ridge High School, Joseph Ossai recorded 58 tackles, eight sacks, 15 tackles as a senior as well as named first-team All-District 12-6A and first-team All-Greater Houston by the Houston Chronicle. A four-star recruit, he signed to play college football at Texas over offers from Oregon, Texas A&M, and Notre Dame.

At Texas as a true freshman, Ossai appeared in all 14 games, starting two of them and made 20 total tackles with one a sack and a forced fumble. The following season, he led the Longhorns with 62 tackles and 5 sacks along with five sacks, two interceptions, one pass was broken up, one forced fumble, and also blocked a kick. In his Junior season, he recorded 55 tackles, 15.5 tackles for loss, and 5 sacks.