Jordan Henderson joined Liverpool in 2011 and became the member of the English national team in 2010. He usually plays as a central midfielder for both club and country.

Henderson began his career with Sunderland in 2008, with a loan spell at Coventry City in 2009, before moving to Liverpool in 2011. He then became captain of Liverpool in 2015 following the departure of Steven Gerrard.

Jordan Henderson was born to Brian and Liz Henderson on 17 June 1990 in Sunderland, England. He is of English nationality and his ethnicity is white. Born in the mid of June, his zodiac sign is Gemini. He has a sister named Jodi Conway.

Jordan Henderson did his schooling at Farringdon Community Sports College before starting his youth career with the Sunderland and spent 10 seasons with the club. He made his professional debut with Sunderland in 2008 and spent on a loan to Coventry City for the 2009’s season.

Jordan Henderson was transferred to Liverpool on 9 June 2011 for an undisclosed fee, reported to be around $26 million. He made his debut with Liverpool’s in 2011-12 Premier League 1-1 draw against his former club Sunderland.

Due to the remarkable performance, he established himself as the regular member of the Liverpool team in 2013-14 and after the departure of the Steven Gerrard in June 2015; he was selected as a captain of Liverpool. Until now, he has 21 goals in 225 appearances.

Jordan Henderson has represented England at four different levels. In 2010, he won his first cap for England and previously served as a captain at the under-21 level. He also represented his nation at UEFA Euro 2012 and 2016, and the 2014 FIFA World Cup.

Jordan Henderson married his girlfriend Rebecca Burnett after having an affair with her. They are living happily together. There is no issue of separation between them. The couple has two daughters; 3 years old Alexa and one and half years old Alba. 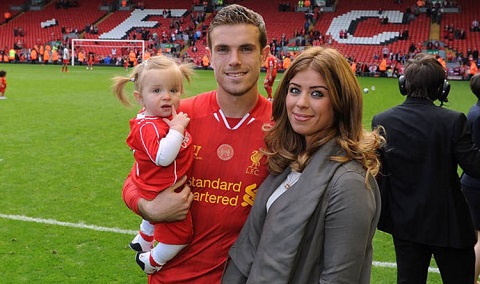 Like every supportive wife who looks to see their husband succeed. Rebecca also supports her husband very much. She manages to be present in every game that her husband plays.

Apart from his skills on his field, Jordan Henderson has a hobby of traveling and spends lots of time in the gym. In the leisure time, he loves to play golf. He is a close friend with his teammate, James Milner.

Net Worth of Jordan Henderson

Jordan Henderson owns few of the best luxury cars including Range Rover, Chevrolet, Rolls Royce, and Ford Mustang. He has a lavishing house in his birthplace Sunderland which he bought in 2010 and it costs around $2 million.