Jonathan Kodjia was born on October 22, 1989, in Saint-Denis, France. He did not come from a reputed family and has not shared much about his parents and early life. Kodjia completed his formal education and started his football carer. Talking about his physical appearance, Jonathan stands six feet three inches tall and weighs 85 kg.

Jonathan Kodjia has an estimated net worth of more than $10 Million. The player credits most of his net worth to his successful career in football. Kodjia has been playing at the professional level for almost fifteen years. A football player has multiple sources of income including earnings from contract, Sponsorship deals and advertising fees. 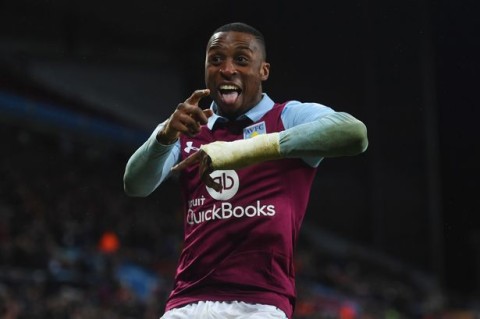 Jonathan celebrates after scoring a goal in the EPL SOURCE: The Mirror

Kodjia is very private about his economic career and stats. The player was among the highest-earning players for Aston Villa in 2016. He joined Aston Villa from Bristol City in an £11 million deal which could rise to £15 million. Jonathan signed with Bristol City on a three-year deal for £2 million.

Jonathan has successfully kept his personal life away from the spotlight. The player could be single, dating or even married to his wife and living a happy married life along with his wife and children. Kodjia has a huge fan following of more than 100k but does not shares much about his relationship status and girlfriend.

Jonathan started his youth career with Reims in his eary teens. He left his school in 2007 and enrolled at  college to build on his baccalaureate in accountancy. Football Scout found him while playing in a local team and arranged a trail with Ligue 2 club, Stade de Reims. Shortly after the trial, Kodjia signed his first major contract with the club.

Jonathan made his professional debut in early 2008 against Dijon. He signed a long-term contract with the club and struggled to play with the first team. In 2011, The player moved to Cherbourg for a loan season. He appeared in sixteen games and scored three goals. The following season, Jonathan was aoned to Amiens and then Caen in 2013/14 season. Angers signed him for a two-year contract. Kodjia became the Ligue 2 Player of the year and moved to England and joined Bristol City.

Jonathan signed a three-year contract worth £2 million. In August 2016, The player signed a a four-year contract for an initial fee of £11 million, that could potentially rise to £15 million. He had a good time with the club and then moved to Al-Gharafa in the Qatari football league. He has appeared in thirty games for the club and scored eighteen games.