Seamus Coleman is a well-known Irish professional football player. He is currently playing in the English Premier League for Everton FC. Seamus turned professional in 2006 with Sligo Rovers in the Irish Football League. Coleman plays as a Right-back for his club and country.

Seamus Coleman was born on October 11, 1988, in Killybegs, Ireland. He is the son of Henry Coleman and Maire Coleman. Seamus has two brothers, Stevie and Francis. Coleman has not shared much about his early life and his parents. Seamus stands five feet and ten inches tall and weighs 70 kg.

Seamus Coleman has an estimated net worth of more than $10 Million. The player credits most of his net worth to his football career. A football player makes a handsome amount from their sponsorship and advertising deals. Seamus has an annual salary of £3,536,000 while playing with Everton FC in the 2022 season. He will receive the amount until 2023. Coleman is a married man living a happy married life and his wife and children. Seamus exchanged his wedding vows with Rachel Cunningham in June 2015 at a private wedding ceremony at the St Mary the Visitation church in Killybegs, Donegal. As per sources, they had been dating each other for eleven years before their marriage. 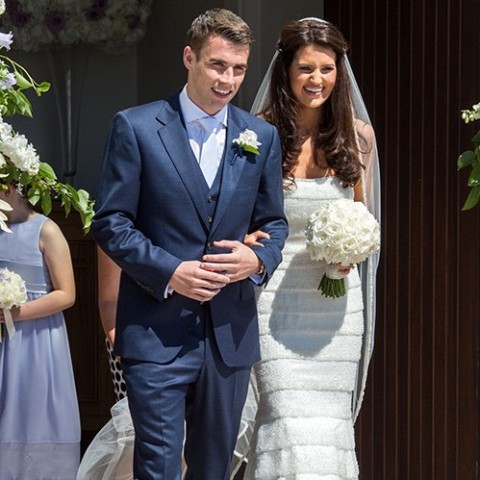 The wedding photo of Seamus and wife, Rachel SOURCE: Pinterest

Coleman and Rachel are the proud parents of two children, Ellie Coleman and Lilly Coleman. None of them are very active in social media and have successfully kept their personal lives away from the spotlight.

Seamus started his youth career with St Catherine's youth academy. He trained with the club until 2006, moved to Sligo Rovers, and made his professional debut in 2006. The player signed a three-year contract with the club and appeared in fifty-six games in the next three seasons. In early 2009, Seamus moved to Everton and signed a long-term deal for a £60,000 transfer fee.

Seamus made his international debut in 2007 with the U21 team. In thirteen games, the player played with the team and made his senior team debut in 2011. He has appeared in sixty-three games for the Republic of Ireland.