Jojo Domann is a well-known American football linebacker. The American international played his college football at Nebraska University. Domann was eligible for the 2022 Draft but remained undrafted this year (2022). After being undrafted, on 6 May 2022, he just signed with Indianapolis Colts as a free agent.

Jojo, the former Nebraska linebacker, was born on 28 July 1997 in Colorado Springs, CO. As of 2022, the Colorado-born footballer is just 23 years old, and his zodiac sign is Cancer, as per astrology. Besides football, he is also the partner of the sports clothing brand named @bodcraft.

The body measurement of Jojo Domann

Jojo Doman, the Former Nesbraksa Linebacker, has a long, athletic, well-built body structure. He stands tall at 6 feet 1 inch and weighs over 104 kg. For further description, he belongs from white family background and has fair skin tone and short black hair.

Domann attended Pine Creek Highschool in Colorado Springs, Colorado, where he played as a receiver and safety. In 2015, he was named the Gatorade Footballer of the team from Colorado. After completing his high school, the 23-years old linebacker decided to join Nebraska University, where he played his college football. He played for five years, from 2017 to 2021, for the Nebraska university. The Colorado-born athlete has a strong connection with Nebraska University. The American international Dormann had 208 total tackles, 5.5 sacks, and three interceptions in his college career. He was eligible for the NFL draft, but unfortunately, he went undrafted in the 2022 NFL Draft. Later, on 6 May 2022, he signed a free-agent deal with Colts.

Sam Ehlinger and Matt Ryan are his teammates

Who is Jojo Dormann's girlfriend? Is he married?

Dormann is still young to get married, but he seems to be in a romantic relationship with his long-time girlfriend Megan Wardym, a former Nebraska Scarlet dancer. She is also a nutrition and health sciences. The love birds came to know each other at college. 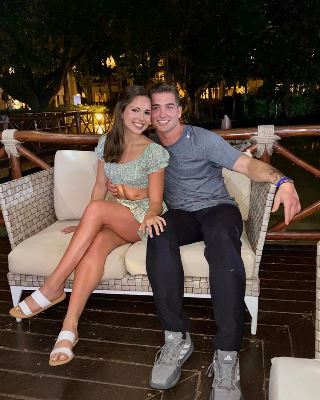 They are frank about their love life matters with the public. The couple often posts their photos on their social media account. The couple seems to be deeply in love and will probably get married shortly.

The American football Linebacker Jojo Dormann's net worth remains a mystery.  He just finished playing his college football in 2021 and also remained undrafted in the 2022 NFL Draft. He has a lot to do. Anything regarding his earnings and salary is not transparent, so we will keep the tabs and update you on this as soon as possible.

Apart from football, he has also set foot in the clothing business. Jojo and his partners have established a sports clothing brand name @bodcraft. From his business, The American international is making good earnings.