Samuel George Ehliner a.k.a. Sam Ehlinger is an American football quarterback who is picked by the Indianpolis Colts in the 2021 NFL Draft in the 6th round. He finished his collegiate career at The Texas Longhorns football team being named 2020 Second-team All-Big 12.

Austin, Texas native, Sam Ehlinger was born on 30th September 1998, under the star sign Libra. The twenty-two years old holds an American nationality and is of white ethnic background. He stands 6 ft 3 in (1.91 m) tall and weighs 225 lb (102 kg).

How Much Is Sam Ehlinger's Net Worth In 2021? Salary & Contract

Sam Ehlinger is the new eligible bachelorette in the NFL. There is no news and rumors of his past and present affair in the media. Additionally, his official socials (Instagram and Twitter) only feature him with his only love, football. There is no romantic scene.

The hunk is possibly single and much focused on his career. Or the story may be completely behind the camera. It just Sam is a low-key person.

Sam Ehlinger enrolled at  Westlake in Austin, Texas, where he played quarterback and graduated as the school's all-time leader in passing yards and touchdowns. Following his junior season, he was named the MaxPreps National Junior of the Year. A four-star recruit, he committed to the University of Texas at Austin for college football.

As a freshman, he split playing time with quarterback Shane Buechele before taking over as the starter in 2018, leading the team to the 2018 Big 12 Championship Game and several bowl games.

Sam Ehlnger is the son of Rose Herbert Ehlinger and Jena Ehlinger. His father, Rose, who was a successful trial lawyer for more than 20 years passed away in 2013. during the Escape to Alcatraz Triathlon in San Francisco. As per the report, he had a cardiac arrest while trying to complete the swimming portion of the race. 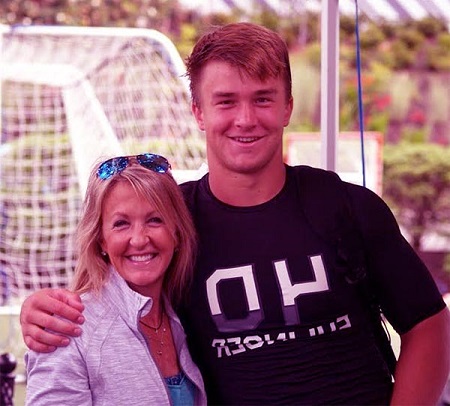 Further, he had a younger brother, Jake, who played linebacker for the Texas Longhorns was found dead on 6th May 2021.