John McGinn is a Scottish professional footballer who is signed to the Premier League side Aston Villa. Early in his career, he played for Hibernian (2015-2018) and St Mirren (2012-2015). A full international since 2016, he has earned 34 caps and scored 10 goals for Scotland's national team.

Glasgow, Scotland native, John McGinn was born on 18th October 1994, under the star sign Libra. He is the third of four children born to Mary McGinn and Stephen McGinn. He has a twin sister, Katie, and two elder brothers: Stephen and Paul, both professional footballers.

How Much Is John McGinn Getting From Aston Villa In 2021? Net Worth, Salary History & Market Value

McGinn is in a relationship with his long-time girlfriend Sara Stokes. The couple started dating in 2014.

The midfielder is not shy to flaunt his love life in the socials. On 31st January 2017, he posted a picture on his Instagram account for the couple's three-year anniversary. Also, he has shared snaps of them together on holiday, at weddings, and other formal events over the years. 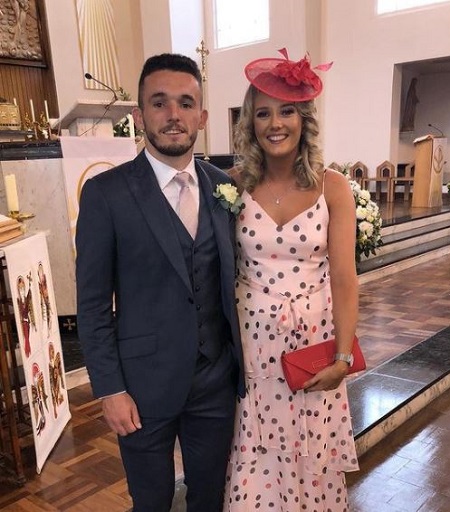 Though there are much fewer posts compared to the past, It's believed the two are still an item. Stokes, who McGinn affectionately calls Stokesy, herself prefers a low-key profile and has a private Insta account.

An academy product of St Mirren, McGinn broke into the first team in pre-season of the 2012–13 season, playing against Carlisle United and Accrington Stanley. He made his competitive debut against SPL champions Celtic in a 5–0 loss, coming off the bench as a 78th-minute substitute.

On 8th August 2018, McGinn inked a four-year contract with Aston Villa, despite interest from Celtic. On 11th August, he made his debut for Villa in a 3–2 victory over Wigan Athletic. On 22nd September, McGinn scored his first goal in a 2–1 home defeat against Sheffield Wednesday which became the EFL Championship goal of the season.

On 8 August 2019, McGinn signed a five-year extension contract with Aston. On 11 December 2020, his contract with the club was renewed, which sees him extend his stay until 2025.

McGinn has represented Scotland at U19 and U21 levels. In March 2016, he earned his first call-up to the senior Scotland squad for a friendly match against Denmark.