Johnny Koutroumbis, a.k.a. John Koutroumbis is an Australian professional footballer currently signed to  Western Sydney Wanderers of A-league as a defender. He has yet to make an international debut but has represented Australia at the U-23 level.

Adelaide, Australia native John Koutroumbis was born on 6th March 1998 under the Pisces star sign. He holds an Australian nationality and is of Greek descent. The twenty-three years old stands 183 cm (6 ft 0 in).

How Much Is John Koutroumbis' Net Worth In 2022?

Aforementioned, John koutroumbis is currently playing as a defender for A-League side Western Sydney Wanderers. However, there is no financial information available between the two parties. The average salary of an A-League footballers is $200,000. Hence, Koutroumbis's annual base salary is believed to be $105,000.

John Koutroumbis is a quite confidential person when it comes to his love life. There is no report of his girlfriend or relationship in the media.

Koutroumbis is active on Instagram with 2,921 followers. But unfortunately, we can not find any lovey -dobby scene there as well. Seems like he is much focused on his ever-growing football career. As of now, he is believed to be single.

Koutrombis was sidelined because he contracted stage 1 thyroid cancer in late 2018 at the age of just 20.

"The little things in life now aren't taken for granted. I'm actually very grateful that it was only stage one thyroid cancer. The doctor actually explained it to me that if you had to choose one cancer to have this was the one," John said.

He soon recovered from cancer.

An academic product of West Adelaide, Koutroumbis was promoted to the senior team in 2015. He played 17 games and scored 2 goals for Adelaide in 2015. 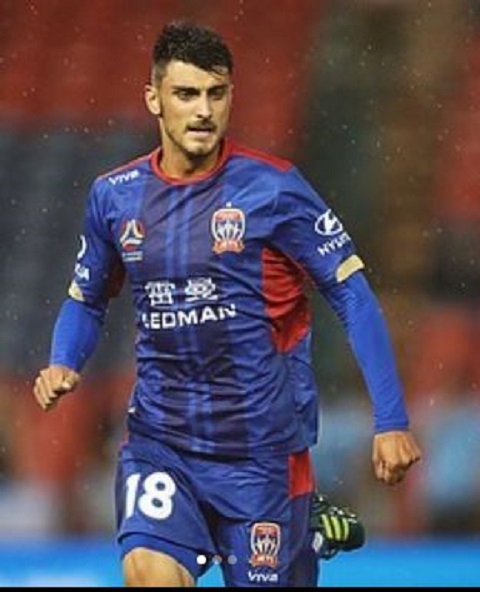 Initially, Koutroumbis signed with Newcastle Jets as an injury replacement for Daniel Alessi. On 2nd Feburary 2017, he signed to Newcastle Jets signed Koutroumbis on a two-year deal. He played 90 matches and scored three goals before mutually terminating his contract with the club in July 2021.