Bernie Ibini-Isei is an Australian professional footballer signed to the A-League club Western Sydney Wanderers. At the international level, he represented Australian U-20 and U-23 national team as well as the Australian senior national team (2014-15), earning two caps.

Bernie Alpha Ibini-Isei was born on 12th September 1992 in Port Harcourt, Nigeria. As a child, he immigrated to Australia and grew up in Sydney's Canterbury-Bankstown region. He has a sister,  Princess Ibini-Isei, also a professional footballer for  Sydney FC in the W-League and the Australian team.

How Much Is Bernie Ibini-Isei's Net Worth In 2022?

Aforementioned, Bernie Ibini-Isei is signed to A-League side Western Sydney Wanderers. Neither the club nor Bernie himself has revealed any information about the financial deal. However, it is believed his annual base salary is no less than $0.2 million, which is an average salary in the league.

It's unknown if Western Sydney Wanderers' winger is married or not but he is a father. He often posts his son on his Instagram account. His son was born on 12th December 2017 and is currently four years old. 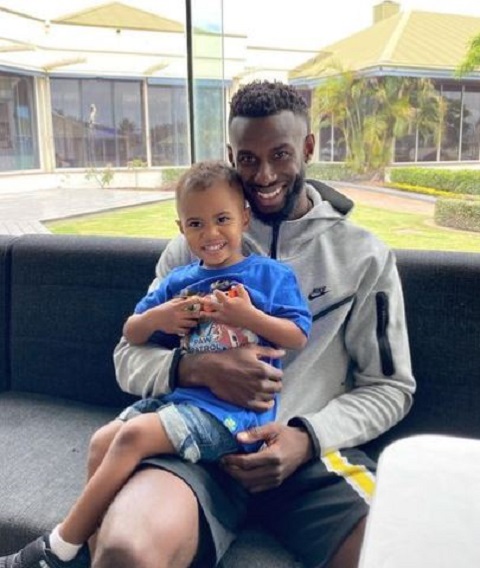 There is no information about his son's momma. Seems like Bernie prefers his personal life private.

Bernie Ibini-Isei started playing football at the tender age of six for a club, Earlwood Wanderers. Further, he played for Blacktown City and Central Coast Mariners during his youth.

In 2010, Central Coast Mariners promoted Bernie to the senior team, making his debut on 10th February 2010 against Wellington Phoenix at Westpac Stadium in Wellington.

His starting debut for the Mariners was against the Gold Coast where he scored in a 3-1.
On 1st Feburary 2012, Central Coast Mariners extended his contract for two years.

On 7th June 2013, he moved to the newly-promoted Chinese Super League side Shanghai East Asia, signing a three-year deal, becoming one of the most expensive under 21 players 21 in Asia.

Following his dad's tragic death he returned to the Australian A-League, and previous club Central Coast Mariners on loan on compassionate grounds In November 2013.

In May 2014, Bernie was loaned out to  Sydney FC. He made his Sydney FC debut in round 1 of the A-League season against Melbourne City, His first goal for the club in a 1-1 draw.
On 3rd June 2015, he was called by Shanghai.

On 21st July 2016, it was announced that Bernie would be loaned out to Sydney FC once again. On 19th October 2016, he made his comeback from injury in an FFA Cup semi-final against Canberra Olympic, where he entered a game as a second-half substitute and scored a late goal in a 3–0 win.

On 9th May 2017, Bernie moved to MLS side Vancouver Whitecaps FC. The following year on 8th August, Whitecaps announced that they and Bernie had mutually terminated their contract.

In 2020, he played six games and scored a goal for the Newcastle Jets. Then, he moved to Western Sydney Wanderers.