Terry Antonis is an Australian footballer signed to the Western Sydney Wanderers as a midfielder. Besides, he has represented his national side on three occasions and was a member of the squad which won the 2015 AFC Asian Cup. At the tender age of ten, Antonis first got the spotlight in Australia after winning a football talent competition on the Channel 7 television show Today Tonight. That resulted in a trip to Madrid to make a training skills DVD with David Beckham.

Bankstown, Sydney native, Terry Antonis was born on 26th November 1993, under the star sign Sagittarius. The twenty-eight years old holds both an Australian and Greek passport and is of Greek descent. He stands 180 cm (5 ft 11 in) tall. His father, Peter Antonis, is Greek-born and his mother is Macedonian-born. He has a brother, George Antonis.

Terry Antonis plays for the A-League Men league side, Western Sydney Wanderers FC where his annual base salary is $200,000.

Due to his exceptional juggling skills, he earned a sponsorship from Adidas. As of 2022, his net worth is $0.5 million.

Terry Antonis is married to Kristina Antonis for a long-time now. On 30th August 2021, Antonis took Instagram to wish an anniversary to his dear wifey. He wrote, "Happy Anniversary @kristinaasc I want to create many more memories together forever love you."

There is no further information about their marriage. Though they are extremely active on Instagram, they have not shared even a single picture of their wedding. 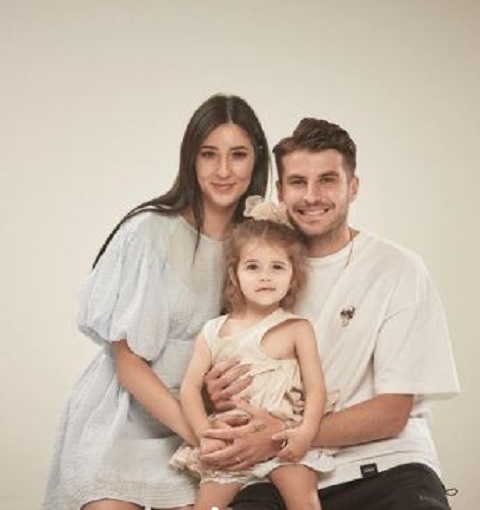 Terry Antonis with his wife and daughter SOURCE: Instagram @terryantonis

In late July 2018, they welcomed their first child, Yana.

On 22nd June 2010, Antonis made his Sydney FC debut in a friendly game against Macarthur Rams at Campbelltown Stadium. On 5th July 2010, he signed a three-year deal with Sydney FC.

In 2015, Antonis moved to PAOK, making his debut for the club on 3rd December in the Greek Cup match away to Chania. On 21st Feburary 2016, he made his Greek Super League debut away to Panathinaikos, entering as an 84th-minute replacement for Giannis Mystakidis.

On 31st August 2016, Antonis was loaned out to Veria for a season long. On 16th October 2016, he made his Veria debut as an 88th-minute substitute for Sisinio Gonzalez Martinez in an away match at Atromitos.

For the remainder of the 2016-17 A-League season, he was loaned out to VVV-Venlo.
In 2018, he signed to Melbourne Victory of the A-League.

On 25th July 2021, he returned to the Western Sydney Wanderers, signing a three-year deal.