John Fleck is a Scottish professional footballer signed to the Championship club Sheffield United. Earlier, the midfielder played for The Coventry City (2012-2016) and Rangers (2007-2012), as well as a loan stint at Blackpool (2012). A full international since 2019, he has earned 5 caps with no goal.

Glasgow, Scotland native John Fleck was born on August 24, 1991, under the star sign Virgo. His father, Alan is also a former amateur  player who is also his first coach. Further, he is a cousin of retired footballer Robert Fleck who played for Rangers, Chelsea, Norwich, and the Scotland national team.

How Much Is John Fleck's Net Worth In 2021? Salary, Endorsement, & Market Value

John and his wife Lauren Fleck are together for a long-time now. It's unclear that when the two exactly started dating but the midfielder got down on one knee in 2019. They had been planning their dream wedding for two years but their special day clashed with the qualifying doubleheader. Nevertheless, Fleck made himself unavailable for the games. 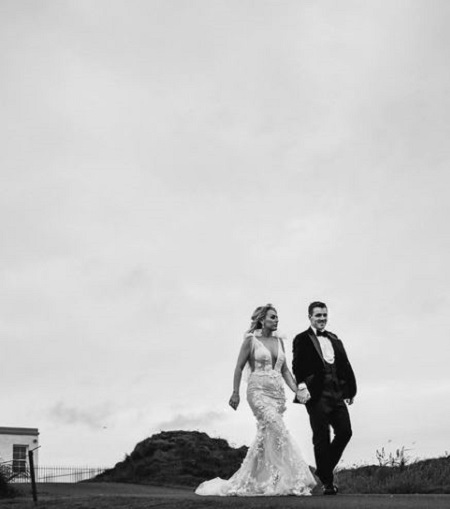 He said, "There was no chance I could have postponed the wedding - Lauren would have killed me."

John and Lauren tied the knot in June 2019 and blessed with two boys Hudson and Ari.

John Fleck started his football career with the Rangers youth system in 2007. On 12 July 2007, he was named to the full squad pre-season tour of Germany. Later three days, he made his debut for the first team against SV Lippstadt 08.

On 23rd January 2008, Fleck made his competitive debut in the Scottish Cup game against East Stirlingshire and made his league debut on 22 May in the final league game against Aberdeen.

On 31st January 2009, he scored his first competitive goal in a 2–0 league win against Dundee United at Ibrox. He played 41 games with two goals for the Rangers.

On 4 July 2012, Fleck signed League One side Coventry City after he declined his Rangers deal being transferred to the new company. On 18th September, he scored his first Coventry goal in a 4–1 loss away to Shrewsbury Town from the penalty spot. Until 2016, he made 162 appearances with 8 goals for Coventry City.

In July 2016, Fleck moved to Sheffield United. For the club, he scored his first goal in a 4–1 victory over Chesterfield on 13 November 2016.

On 22 September 2017, Fleck agreed on a four-year extension contract with Sheffield. On 22 February 2020, he re-signed a new three-year deal.

In November 2018, Fleck received his first call from the Scottish senior team. In May 2021, Fleck was called for the 26-man Scotland squad for the 2020 European Championships alongside Billy Gilmour and Andrew Robertson.