Joe Rodon is a famous footballer hailing from Wales who has been playing for Ligue 1 club Rennes since joining them on August 1, 2022. He came on a loan to his team, but before that, he was with Premier League club Tottenham Hotspur. In addition to being played for the club, Rodon is also a national player who plays nationally and internationally for the Wales national team.

Furthermore, Rodon is one of the most skilled players on his team as he has helped his team to win some titles. Not to mention, Rodon plays a center-back, and due to his fantastic performance, the professional footballer has received comparisons to Fikayo Tomori, a professional footballer from Canada playing for Serie A club AC Milan and the England national team.

Net Worth: Joe Rodon's Salary in His Current Team

The professional football player Joe Rodon makes a good sum of money from his profession. It can be said that he has racked an enormous profit from being engaged in this field for many years. Currently, he is on loan to Ligue 1 club Rennes.

So, being associated with the Rennes team, Rodon may take home a decent salary. However, the actual amount of his compensation remains under review as none of the verified sources have given a hint about it. But we know that Rodon is a professional footballer who has been a part of multiple teams, and with them, he also had an impressive deal. Making a good profit with those teams, Rodon has indeed preserved a considerable fortune, and his net worth is not less than a million dollars. According to a report given by Taddlr, Rodon is estimated to have a net worth of around £2.2 million, which is approximately $2.58 million.

As said earlier, Rodon has played for some teams, and his fans are concerned about his transfer, rate or fees, and market value which we've discussed below.

Beginning his career with Swansea City, Rodon later moved to other teams, and he did really well. After playing with Swansea City and Cheltenham Town, Rodon received an offer to play for Premier League club Tottenham Hotspur with whom he came signing a deal worth £11 million.

So, it can be said that Rodon made most of his gains from being with the Hotspur team. Taking this fact into consideration, Rodon has preserved a considerable fortune, and the report by Transfermrkrt shows that Rodon's current market value is €8.00m. 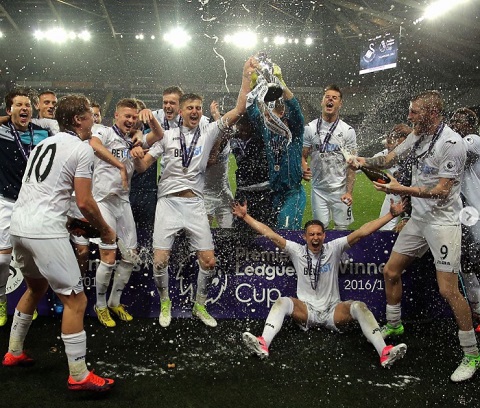 However, it is not the highest value of Rodon, as his highest market value was €10.00m on December 17, 2020. As Rodon is still playing football actively, there is not a single doubt that his income will skyrocket in the near future.

Joe Rodon Is Private About His Love Life

Moving into his personal life, Rodon is a private guy who does not like to share his personal information with the media. Due to this reason, we are unknown whether Rodon is dating a girlfriend or leading a single life. As Rodon has not made a single post about his lover on his Instagram account, we can say that the footballer is enjoying his solitary life.

As Rodon has maintained a distance from the media, he has not been involved in any rumors or controversies regarding his love affair. At the moment, Rodon is focused on his career, and rather than searching for a life partner, the Swansea native is prioritizing his football career.

The young footballer began his football career after joining Swansea City in 2005, and during that time, he was just eight years old. Rodon spent his youth career with the same team with whom he signed a professional contract in July 2015. In January of the following year, he was named on the first-team bench for the FA Cup tie with Oxford United.

Likewise, Rodon was named on the first-team bench in the Premier League game at the Emirates Stadium versus Arsenal in October 2017. In a match against Cheltenham Town in the EFL Trophy, he played as a captain of Swansea's under-23 team, and his team also won the game. Later, on January 30, 2018, Rodon moved on to play for League Two side Cheltenham Town on loan for the 2017-18 season. After that, he came back to his own team. Being with the Swansea City team, Rodon appeared in 52 games. On October 16, 2020, Rodon signed for Premier League club Tottenham Hotspur on a five-year deal.

On October 26, 2020, Rodon made his Premier League debut for Tottenham Hotspur by playing against Burnley. In total, he played 15 games representing Tottenham Hotspur. Likewise, Rodon entered the French club Rennes on August 1, 2022.

You May Read: Charlie Savage

Short Details on His Career at the National Team

Being a native of Wales, Rodon plays for the national football team of Wales. He has represented the U20 team, and with them, he played in 3 games. Likewise, he played for the Wales U21 team from 2016 to 2018 and made seven game appearances.

Later, Rodon received a call from the senior team and made his debut in September 2019 by playing against Azerbaijan. Not only that but Rodon was also selected for the Wales squad for the delayed UEFA Euro 2020 tournament.

Well, Joseph Peter Rodon was born on October 22, 1997, in Swansea, Wales. The professional footballer was raised by his supportive parents, Tania and Keri. As we know, he has an athletic family background, as some of his family members are engaged in sports. His father, Keri, is a former basketball player who plays for Wales. Besides, Rodon is not only the child of his parents as he was raised with his brother named Sam Rodon, who is also a football player. Similarly, his grandfather is Peter Rodon, who was a Welsh professional footballer.

In addition to that, his uncle named, Chris Rodon, is also a retired professional footballer who played as a striker.