Jiri Vesely is a Czech professional tennis player who as of June 2021 has a singles career record of 129-146 in ATP Tour, Grand Slam, and Davis Cup. His titles include Auckland Open (2015) and Maharashtra Open (2020). Likewise, he is also the joint winner of doubles trophies Kremlin Cup and Istanbul Open.

Vesely was born in Pribram, Czech Republic on July 10, 1993. Vesely turned pro in 2009 and three years later won his first-ever title the boys' singles title at the Australian Open Junior.

Vesley was the no 1 junior combined world ranking in January 2011, with a singles win/loss record of 125-45. He began his pro career debuting in Davis Cup for the Czech Republic in February 2013 and to date has nine singles titles on the ITF Futures circuit to his name and three Challengers. In 2013, he reached the third round of the BNP Paribas Open where he lost to Andy Murray in three sets. 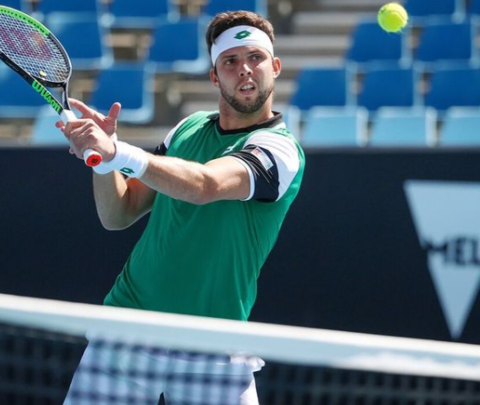 In the 2014 French Open, he went till the third round where he was beaten by Nick Kyrgios. That year, he won his first doubles titles at ATP World Tour with Frantisek Cermak, also a Czech international. He next won his first ATP title at Auckland before reaching the third round at US Open. In 2016, at the Monte Carlo, he defeated world no 1 Novak Djokovic in a stunning second-round upset.

He made it to the second stage of the French Open besting Rajeev Ram in the first round but later was eliminated by Nicolas Almagro. At the 2016 Wimbledon, the East European defeated Dominic Thiem, to move through to the third round. After getting through the third round he faced defeat at the hands of Tomas Berdych.

In 2016, he was active at the US Open till the second round. In 2020, he defeated Egor Gerasimov in 3 sets to win his first title since 2015, the Maharashtra Open. At the Mallorca Championships 2021, he was defeated by Pablo Carreno Busta in the second round with a score of 4-6, 4-6.

As of yet, Vesely has competed in 29 singles and 16 doubles Grand Slam tournaments.

Jiri Vesely's Net Worth and Earnings The current ATP World no 71 is married to Denisa Vesela. To his followers' knowledge, Vesela has been seen around the tennis player since September 2014. The month also happened to be the first time, Vesely had introduced his future wife to his Insta fans. Thereafter, the left-handed swinger continued to feature her through several of his social media activities. Fast forward to June 22, 2017, the former Auckland Open winner announced his engagement with Vesela, yet again through his Instagram handle. Two years later, the couple celebrated their wedding in June 2019 just three months after they had their first child, a daughter named, Sofie. On April 14, 2021, the pair welcomed their first baby boy, Patrik.