Jillian Wisniewski is a Production Business Manager at McGarry Bowen in Chicago. She is better known as the current girlfriend of an American professional golfer Justin Thomas who is a former World Number One and competes on the PGA Tour. The love birds have been dating each other for more than four years.

Jillian Wisniewski was born in 1993. Jillian rose to fame only after her relationship with Justin, so much information about her early life still undisclosed. Jillian enrolled at the University of Kentucky and graduated with Bachelor's degree in Journalism. She worked for the university TV department while she attended the university.

Jillian and her boyfriend Thomas started dating each other in early 2016. They first opened about their relationship in 2017 when they exchanged a kiss after her boyfriend won his first major title. Both of them seem to be very much supportive of each other. Jillian currently resides and works in Chicago while her partner Thomas travels around the world a lot for golf competitions. 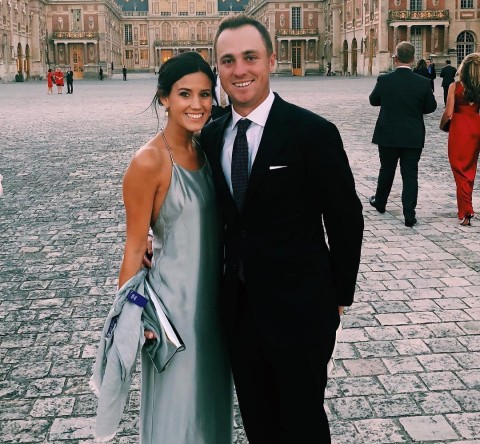 Jillian along with her boyfriend, Justin SOURCE: [email protected]

Although Thomas is active on social media, he rarely posts along with his girlfriend. Jillian keeps attending her boyfriend's games regularly. Both of them are very much early in their career so, they are yet to tie their wedding knot. It's been more than four years of their relationship, and there have been no rumors of the couple having ups and downs in their love life.

Jillian's boyfriend, Thomas, has an estimated net worth of more than $50 Million. He is ranked 21st in the list of highest-earning golfer with total earnings of $40,220,860. Justin has more than half a dozen sponsors, including Titleist, Polo, Citi, NetJets, Beats, Woodford Reserve, and a few more. Lately, Ralph Lauren withdrew its sponsorships.

Justin has won a total of six professional tours. He has won fourteen PGA Tours, Three European Tours, Two Asian, and a Korn Ferry Tour. The golf player is at his prime and shall be earning much more in the days to come. Thomas was ranked at No.1 in 2018 for five weeks.

Jillian has been working at McGarry Bowen since 2017. She seems to be very much satisfied with her job. On the other hand, her boyfriend, Justin, started playing professional golf in 2013. He has played and won several amateur titles. He won his first professional event at the 2014 Nationwide Children's Hospital Championship.

In 2017, Thomas rose to fame after winning his first major, the 2017 PGA Championship, winning by two shots. The following year, he won few more titles and improved his ranking to No.1. In 2019, Jillian won the BMW Championship. At the end of the season, he returned to Number One in the Official World Golf Ranking for the second time in his career.