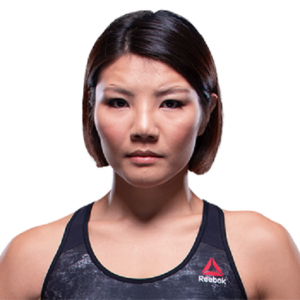 As of 2020, Ji Yeon Kim has an estimated net worth of $0.2 million, mostly earned through her MMA career and sponsorship deal. Currently, she is signed to the UFC the fighter gets paid a base salary on fight night no matter if they win or lose and has a “win bonus” involved for the winning fighter. Not to mention the “fight of the night” and “performance of the night.”

Nothing is known about Ji Yeon Kim's love life. Neither she has openly talked about her relationship in the interview nor she has been spotted with a guy in the public who is assumed to be a potential partner. Further, most of the posts on her socials are from her professional life. With less to no information regarding her relationship, she is believed to be single.

Ji Yeon Kim was born to South Korean parents and raised in Incheon. However, she has not revealed further information about her family members.

Kim began training in the 8th grade after seeing a kickboxing match on TV, which eventually set off her desire for a career in combat sports. She has a purple belt in Brazilian Jiu-Jitsu, a 3rd-degree black belt in Hapkido, and a black belt in Wushu.

On June 17, 2017, Kim made her UFC debut at UFC Fight Night: Holm vs. Correia in Singapore where she lost to Lucie Pudilova via unanimous decision. She next faced Justine Kish at UFC on Fox: Jacare vs. Brunson on 27th January 2018. She won the fight through the split decision.

On June 23, 2018, at UFC Fight Night: Cerrone vs. Edwards, Kim defeated Melinda Fabian via split decision. Her 4th UFC fight came on 6th October 2019, at UFC 243 against Nadia Kassem. Though she won the fight she was fined 30 percent of her purse for weighing 2 pounds over the flyweight.