A very talented Jermain Defoe is a professional football player from England. Currently, he plays as a striker for Scottish Premiership club Rangers, on loan from AFC Bournemouth of the Premier League and England national team. He started his professional career with West Ham United in 1999. He made his international debut for England in 2004. Currently, he is the seventh-highest goalscorer in the premier league history.

The thirty-six years old has an estimated net worth of $20 million. Regarding his relationship status, he is dating.

How Much Is Jermain Defoe Net Worth In 2019?

As of 2019, Jermain Defoe has an estimated net worth over $20 million as of 2019. The main source of his income is his football career.

He is currently signed to Scottish Premiership club Rangers, on loan from AFC Bournemouth where his weekly salary is reported €46,000 i.e: €2,392,000 per annum. Back in 2015, his salary was $3.64 million from Sunderland.

With a tremendous net worth and salary, he is living a lavish lifestyle.

Jermain Defoe is not married. He does not have a wife in his life. Currently, he Dating his girlfriend. On 16th October 2018, he shared a picture with his girlfriend, captioning "3 years with this beautiful one. Happy anniversary". 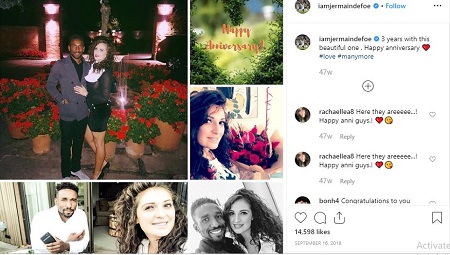 Previously, he was link-up with several women in the past. He dated British author Stephanie Moule from 2001 to 2007.

Upon having an affair with Danielle, he dated Imogen Thomas, Chantelle Houghton, and Alexandra Burke.

Jermain Defoe is a devoted Christian.

Jermain Defoe career and stats are incredible. He has an extraordinary personality. He has reached the age of 36 now. He has a standing height of 5 ft 7 inch, which is around 1.70m.

Jermain Defoe was born as Jermain Colin Defoe on 7 October 1982 in Beckton, England. He is English by nationality. His ethnicity is unknown at this time. His zodiac sign is Libra. He is the son of Jimmy Defoe (his father) and Sandra Defoe (his mother).

Jermain Defoe went to St Joachim Primary School in Custom House, London, and St Bonaventure’s in Forest Gate, London. As a youth, he played with Senrab F.C and Charlton Athletic.

Jermain Defoe started his professional career with West Ham United. He played with United from 1999 to 2004. While playing with United, he also loaned to Bournemouth. From 2004 to 2008, he played with Tottenham Hotspur. In January 2008, he signed to Portsmouth for £7.5 million.

Upon playing with Portsmouth, he returned to Tottenham Hotspur. He stayed with Hotspur for five seasons. Upon playing with Hotspur, he signed to Toronto F.C where he played for one season. On 16 January 2015, he agreed on a three-and-a-half-year deal with Premier League club Sunderland.

Jermain Defoe also represented his nation at the international level of football. In March 2004, he debuted for senior England team in a 1-0 win over Sweden. As of now, he scored 20 goals in 56 apps, which includes three appearances and a goal at the 2010 FIFA World Cup. His national teammates include Harry Kane, Jordan Pickford, and Kyle Walker.