Jericho Sims is a rising American college basketball player. He has played college basketball in the Big 12 Conference for Texas Men's basketball team, Texas Longhorns. Jericho plays with the position of forward with his team. Sims is currently playing in his senior year with the team.

Jericho Sims was born on October 20, 1998, in Minneapolis, Minnesota. He is among the six children born to Charles Sims and his wife, Kimberly Sims. His father played basketball at the University of Minnesota. He has five older brothers. After graduating from Cristo Rey Jesuit High School in Minneapolis, Sims enrolled at the University of Texas. Talking about his physical appearance, Jericho stands six feet and ten inches tall and weighs 110 kg.

Jericho started playing basketball from his early age. His brothers also played basketball for their university. Sims played for his High School team and graduated as the all-time leading scorer (2,005 career points). Jericho averaged 21.8 points, 11.2 rebounds, 3.7 assists, and 1.4 blocks as a junior. As a senior, The player averaged 25 points and over ten rebounds per game.

Jericho played in 34 games for his freshman year for the University. He averaged 5.0 points and 3.9 rebounds in 18.5 minutes per contest on the season. Jericho started all five games in the NIT run for his sophomore year and averaged 5.6 ppg and a team-best 7.0 rpg in 23.2 mpg. Sims was part of all thirty-five games in the season. As a junior, The player started in 24 games and was named into All-Big 12 Honorable Mention selection.

Jericho led the team in rebounding (8.2 rpg) and ranked second in blocks (29) and fourth in scoring (9.7 ppg). In February, He suffered a stress fracture in his back following the Baylor game and missed the remainder of the year. Jericho has been playing in the team along with Greg Brown and Jaxson Hayes. Many experts are keeping an eye on him to list his name for the upcoming 2021 NBA draft. However, Sims is yet to share a word about his thoughts.

Who is Jericho Sims Dating? Know About His Relationship Status

Unlike other rising basketball players, Jericho is not an active social media user. He has become successful in keeping his personal life away from the reach of the media. Sims seems to be living a single happy life on his own. The player is very much early in his career and must be focusing on making his career rather than spending time with people.

Jericho is currently playing for his university team. As per the rules, a university player does not receive any amount to represent a university team. However, University provides them with scholarships that help them to cover most of their expenses. Sims is among the top-rated player in the Big 12 Conference. 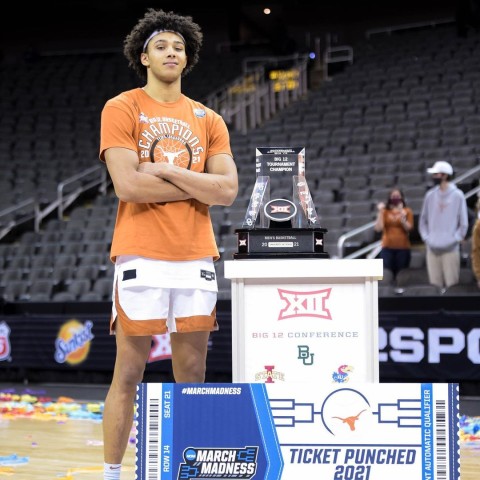 Jericho is sure to land a huge contract if he enlists his name for the upcoming 2021 NBA draft. The average salary of a NBA rookie is more than $5 Million.