Damien Jefferson is a college basketball player who plays for the Creighton Bluejays men's basketball team in NCAA. The basketball forward is third Creighton underclassmen to declare for the 2020 NBA Draft. However, he still has the option to return to school for his final season of eligibility after going through the evaluation process by league executives.

How Much Is Damien Jefferson's Net Worth? 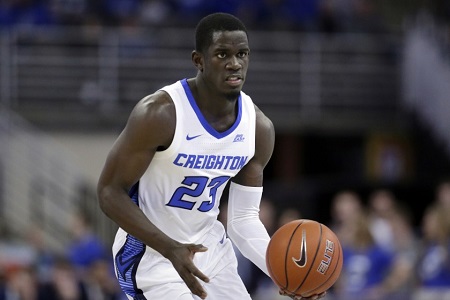 The NBA market has lately been full of news and reports of 2020 NBA draft prospects from various colleges and Damien Jefferson is among them. If the 6-foot-5 wings get picked in the up-coming draft he will have a tremendous contract with the NBA team which features a million dollars signing bonus and salary.

The twenty-two years old Creighton Bluejays' basketball forward has maintained a low key personal life. Neither in public nor in socials such as Instagram or Twitter, he has been spotted with a lady who is assumed to be his potential girlfriend. Without any confirmation by his side, the hunk is possibly single.

Seems like Damien is much more focused on his basketball career rather than involving in a romantic relationship.

East Chicago, Indiana native, Damien was born on 3rd October 1997, under the star sign Libra. The twenty-two years old holds an American nationality and belongs to the Afro-American ethnic background.

Furthermore, he is the son of Everette and Rose Jefferson. He was raised alongside his siblings Derek and D’Andre, with D’Andre being his twin brother. Their father, Everette also played basketball for New Mexico in 1979-80 and led the team with 5.7 assists and 1.9 steals per game. Damien said, he wears No. 23 because of his dad and Michael Jordan.

Rated a top-150 player nationally by Rivals.com, Damien Jefferson spent only one season playing at the same school his father called home. For the 2017-2018 season, he transferred to Creighton University. During Summer 2019 Australia trip, he averaged 11.3 points and 6.0 rebounds while starting all three games. In 2019-20 junior season at Creighton, he started 29 of the 30 appearances, averaging 9.4 points and a team-high 5.5 rebounds per game.