Greg Brown is a rising American college basketball player. He has been playing in the Big 12 Conference for the Texas Longhorns. Greg was a consensus five-star recruit in the 2020 class. Brown was named the Texas Mr. Basketball in 2020 and also made it to McDonald's All-American 2020.

Greg Brown was born Greg Timothy Brown on September 1, 2001, in Dallas, Texas. He is among the four children born to Gregory James Brown II and his wife, Tonya Wallace. His father played college football as a safety for Texas before playing in the NFL Europe and the Denver Broncos of the National Football League's practice squad. After graduating from Vandergrift High School, Greg enrolled at the University of Texas. Brown stands six feet and nine inches tall and weighs 93 kgs.

Greg comes from athletic family background. His father and uncles played in NFL. Greg played numerous sports in his High School. He was a basketball starter, competed in varsity track and field in the high jump. Greg left all the sports and kept all his focuses on basketball. The basketball player averaged 17.2 points, 10.7 rebounds, and 3.6 blocks per game in his freshman season. Greg was named in All-Central Texas Newcomer of the Year honors from the Austin American-Statesman. 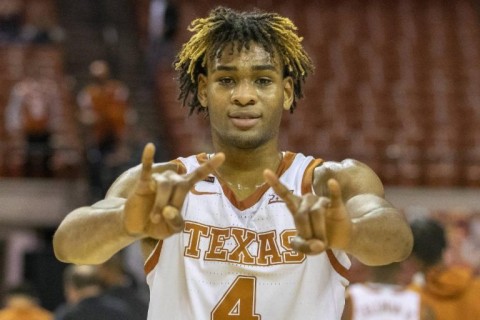 Greg is currently playing for the Texas Longhorns SOURCE: Envegure

Brown continued his form in his sophomore year and was awarded the Most Valuable Player for his average of 27.4 points, 12.3 rebounds, and 2.5 blocks per game. He missed 14 games early in the junior season with a dislocated finger. Brown was named to the All-Central Texas first team for his third straight year. In his final year, Grid won the Gatorade Player of the Year and  Austin American-Statesman All-Central Texas Player of the Year honors.

After graduating from High School, Greg was a consensus five-star recruit and a top-10 player in the 2020 class. Numerous universities like Auburn, Kentucky, Michigan, Texas offered him athletic scholarships. On April 24, 2020, he announced his commitment to Texas along with Jaxson Hayes. He even rejected a $300,000 offer from the G League. Brown started his college debut with 11 points and ten rebounds.

Greg Brown is single as of early 2021. Unlike other rising American college basketball players, Greg does not show much presence on social media. He likes to keep his personal life away from the public. Following news from the sources, Brown is happy being single and is currently focusing on his career.

How Rich is Greg Brown? Know About His Earnings and Net Worth

Brown is very much early in his career. He rejected a $300,000 offer to play from G League after completing High School. As per rules, University players are not allowed to receive a penny from any organization to play the game.

Universities provide the players with numerous scholarships that will help them to cover most of their tuition fees, living fee, and miscellaneous expenses. Greg will shortly be listing his name for the NBA draft and shall be landing million dollar contract with a franchise.