Jelena Ostapenko is a rising Latvian professional tennis player. She has been playing at the professional level since 2012. OStapenko has won four singles titles and four doubles titles. Ostapenko reached the final of the Grand Slam Doubles in 2019 Wimbledon. Jelena represented Latvia in the Youth Olympics.

Jelena Ostapenko was born on June 8, 1997, in Riga, Latvia. She is the daughter of Jevgenijs Ostapenko and Jelena Jakovleva. Her father is a former professional football player, and her mother played tennis in her early days. Jelena has one half-brother, Maksim, who lives in the United States. Ostapenko stands five feet and ten inches tall and weighs 68 kg.

Jelena Ostapenko has an estimated net worth of more than $10 Million. The player has earned most of her net worth through her successful career in WTA and ITF events. She is among one of the most successful tennis players very early in their career. Jelena could be among the highest-earning player in the WTA in the future. 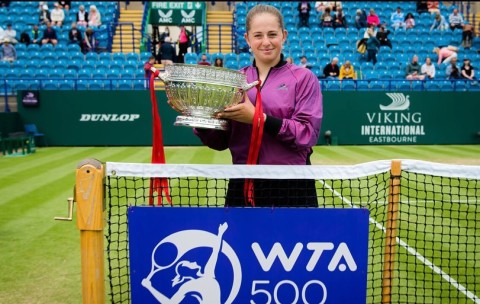 A tennis player makes a handsome amount from their sponsorship and advertising deals. Jelena signed a major deal with Adidas and Wilson in her early days. She uses a racket from Wilson Blade and wears the clothes and shoes from Adidas. In 2021, Ostapenko took home prize money of $335,000 while reaching the semi-final at the BNP Paribas Open. In 2020, She appeared in a few events but earned a handsome amount of close to $300,000.

Jelena is very much early in her career. She will be adding a huge net worth in the coming days. Totaling her prize money until early 2022 sums to $10,175,304 from WTA events.

Jelena keeps sharing numerous personal photos in the timeline. Following her timeline, it seems like, The Latvian professional tennis player is single as of early 2022. She is very close to her friends and family and likes to spend most of her free time with them.

Jelena could be single but was involved in a romantic relationship with her former boyfriend, Arthurs Karasausks. Arthurs is a soccer player, and the love birds opened up about their relationship after Jelena won the 2017 French Open. However, They seem to have separated and do not show any communication in public.

Jelena started her early days playing football along with her father. She started training tennis while she was in School. Ostpaneko rose to fame after winning the single event at the junior Wimbledon Championships in 2014. Jelena earned her WTA main-draw in 2014 at Tashkent Open. The player earned her first title at the Ladies Neva Open the following year.

Jelena reached the finals at the 201 Qatar Open. She lost her first match in the French Open against Naomi Osaka. The same year, She represented Latvia in the 2016 Summer Olympics. At the end of the season, The player won the French Open and ended the year ranked No.7. The following year, Jelena entered in the top-5 and was dropped later.