Jasmine Walker is a rising American professional basketball player. She played her college basketball for the Univesity of Alabama's women basketball team, Alabama Crimson Tide.  Jasmine graduated from her university and listed her name for the WNBA 2021 Draft. Los Angeles Sparks drafted her on the first 1st round pick.

Jasmine Walker was born on February 3, 1998, in Montgomery, Alabama. She is among the two children born to Charlotte Savage and her husband. Jasmine has a brother named Prince Savage. After graduating from Jefferson Davis High School, Walker completed her undergraduate studies in human performance exercise science from the University of Alabama. Jasmine stands six feet and three inches tall and weighs 75 kgs.

Jasmine started playing basketball from a very early age. She played AAU basketball with the Southern Stars under former head coach Al Hooks. In her junior year, Jasmine averaged 15.9 points and 8.1 rebounds per game. Walker averaged 19.6 points for her senior year, 7.9 rebounds, and 2.6 assists per game while collecting 13 double-doubles. The player the Lady Vols to back-to-back Class 7A titles in 2015 and 2016.

Jasmine ended her High School carer with 1900 points and 908 rebounds. She was awarded Montgomery Advertiser All-Metro Player of the Year twice and remained state tournament MVP two times. She was the 2016 Gatorade Player of the Year for Alabama and Alabama Miss Basketball. After graduating from High School, Walker committed herself to the University of Alabama. 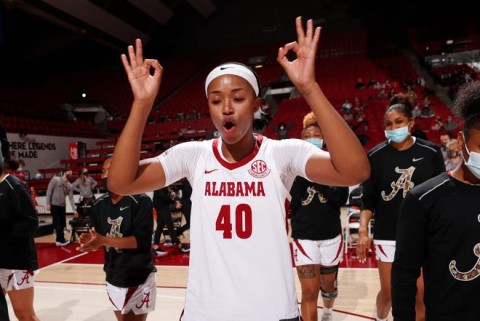 CAPTION: Walker celebrated after scoring a three-point in a game SOURCE: Tuacaloosa News

Jasmine averaged 5.7 points and 4.2 rebounds per game in her first year with the Tide. She continued her form into the sophomore year, where she started 29 games and played all 31 contests for the Crimson Tide. Walker averaged 11.9 points, 7.1 rebounds, and 1.1 assists per game in her sophomore year. Walking into the junior year, The player was 10th highest single-season three-point percentage.

Walker was second on the team with 11.9 points and first in rebounds with 7.1 per game. She was named into the 2019 SEC Academic Honor Roll. Jasmine's points dropped to 5.7 points, 4.2 rebounds, and 0.6 assists per game in her senior year.

Who is Jasmine Walker Dating? Know About Her Boyfriend

Jasmine is very much private about her personal life. However, She is an active social media user. Her timeline is filled with posts of her family and her friends. There is no rumor of her dating someone. So, Jasmine Walker must be single as of early 2021. She seems to be very much focused on her making her career.

Jasmine has an estimated net worth of more than $50,000. Walker recently signed a contract with her franchise, Los Angeles Sparks. The average salary of a player playing for the sparks is more than $80,000. She is among the top-rated player and shall be making a huge net worth to her name.