Jalen Hurts a rising American Football quarterback. He was recently picked by the Philadelphia Eagles of the National Football League in the second round of the 2020 NFL Draft. He spent four years in his college football for two clubs, Oklahoma and Alabama.

Jalen Hurts was born Jalen Alexander Hurts on August 7, 1998, in Houston, Texas. He is among the three children born to Averion Hurts and his wife, Pamela Hurts. Nothing much about his parents' profession is known to the media. He has an older brother named Averion and a younger sister named Kynnedy. His parents are very supportive of his games and used to attend his games from an early age.

Jalen Hurts Net Worth and Contract with Eagles 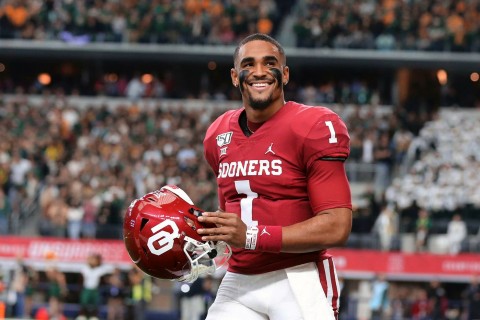 Jalen signed a contract with the Eagles of $6.025 Million SOURCE: Inquirer

This is just the very first earnings; Hurts shall be earning more in the days to come. He is just twenty-two years old and shall be playing with the League for at least a decade. Dak Prescott and Aaron Rodgers are two well-known American football player with a net worth of more than $10 Million.

Hurts started playing American football from his early days in High School. Hurts played with his High School team. Hurts was ranked among the top dual-threat quarterbacks in the Class of 2016. His father, Averion, was the coach of the High School football team. In his senior year, Jalen passed for 2384 yards, and 26 touchdown passes. He was named the District 21-6A Overall MVP as a junior during his high school playing years.

During his time in High School, Jalen participated in powerlifting. He was the regional finalist in the Powerlifting 198-pound weight class. After graduating from High Schoo, Hurts received several sports scholarships, especially from Texas A&M University wanted to sign him, but he committed himself to the University of Alabama.

Texas Native, Jalen played a total of fifteen games in his Freshman year with his University team. He was featured on the cover of Sports Illustrated Collge Football Playoff Magazine. Hurts continued his form throughout his time with his College team. He graduated with a BA degree and transferred to the University of Oklahoma for the final year. Hurts helped lead Oklahoma to a Big 12 Championship and a spot in the College Football Playoff.

In his first year with the Eagles, Hurts played a total of eleven games. He has started with a medium start to his professional career. Jalen is yet to make a big impact in major tournaments. Jalen is playing with his teammates Nick Foles in the upcoming days.

Jalen is an active social media user. Following his posts on his Instagram account. He seems to be single as of 2020. There have been no posts that may link him to be involved in a romantic relationship. Jalen is very much early in his career and might be focused on making a career and start a love life. Hurts likes to spend time with his family and his friends.