Jahleel Addae is an American professional football safety who is currently a free agent. He played 6 years long for the Los Angeles Chargers of NFL, which signed him as an undrafted free agent in 2013.  Moreover, he completed his collegiate career from Central Michigan University where the hunk was a captain and 3X All Mid-American Conference player.

Jahleel is currently living with his fiancee Lindsey Nelson and has a son named Zion. As of now, his estimated net worth is over $10 million.

As of 2019, Jahleel Addae has an estimated net worth of over $10 million same as that of Blaine Gabbert.

His total earning throughout his career in Los Angeles:

Neither married nor single, Jahleel Addae is currently in a romantic relationship with his lovely and gorgeous fiancee Lindsay Nelson.

As the pair has not tied the not yet, they looking forward to get wedded soon on Saturday, July 6, 2019, and the reception will be held at the Ritz-Carlton in Key Biscayne. 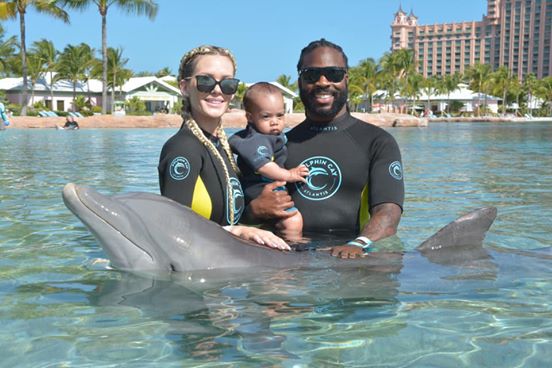 CAPTION: Jahleel with his fiancee and son SOURCE: Heavy.com

So far the couple is living a happy life with their son Zion who was born in 2018 since there are no rumors regarding their separation.

There are many discussions regarding their color since Jahleel is a black man and his fiancee is a white colored lady but no matter what, they are happy with each other.

Jahleel has made his social accounts private but has a huge number of fan followers on his official social accounts. Addae is not only a world-class athlete but also has a very attractive individual.

Besides, he has a height of 5 feet 10 inches and weighs around 93 kilograms with a charming personality and black hair color.

Jahleel Addae was born on January 24, 1990, in Valrico, Florida, the United States. As per his nationality, he is American and belongs to Mixed ethnic group and his star sign is Aquarius.

He was raised alongside his elder brother Jahmile Addae, a football player.

Jahleel began his NHL career in 2012 and was ranked the 20th best strong safety by NFLDraftScout.com and was signed by the San Diego after being undrafted in the 2013 NFL Draft. After showing his outstanding performance, he was named back up for safety by head coach Mike McCoy. During his training camp in 2014, he competed against Marcus Gilchrist and made his 4 solo tackles against Derek Carr in the 2015 season.

Addae was released by the Chargers after six seasons, on March 9, 2019.