Lewis was born in the early 1960s. The exact birth date of Jacqueline Lewis is still under investigation. Also, She did not come from a reputed family and came to the limelight only after her marriage with Wally. There is not much information available in the media about her early life and her parents.

Divorced After Thirty-Six Years Of Marriage

Jacqueline and Wally, along with their family, were living a happy life. All of a sudden, A rumour of the divorce of the couple swirled in the market. This rumour got confirmed after her son, Lincoln Lewis, and her daughter Jamie-Lee posted a cryptic story on their Instagram account on February 2, 2021. Also, Lewis sold his much-loved family home in Brisbane for a reported $2.1 million after less than a week on the market. 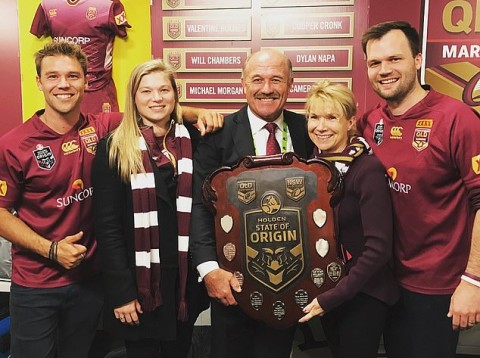 Wally Lewis with his wife and children SOURCE: Daily Mail

As per the sources, the love birds have been separated for more than a year now. The reason for their separation is still unknown to the public. However, Some rumours claim Wally to be dating someone.

Walter and Jacqueline tied their wedding knot on November 10, 1984, at St John's Cathedral in Brisbane. They had been seeing each other for more than two years before their marriage. The duo had three children, Mitchel,  Lincoln, and Jamie-Lee, from this happy marriage. They could be seen attending numerous events and functions together.

Net Worth and Earnings of Wally Lewis

Wally Lewis is a Rugby legend. He has been earned millions since he started playing Rugby at a professional level. While his career at Trinity, he got paid  $1425.31 per game, which was world-record wages of that time. Wally has been working as the sports news presenter and analyst for the channel Nine. He recently sold a mansion for $2.1 Million.

Lewis owns several other lavish Mansions in Brisbane and outside of the city. Wally's children have been earning hefty amounts from their careers. Lewis’s daughter Jamie-Lee is a professional water polo player. Whereas his son, Mitchell, is a presenter on the Nova FM radio station and another son, Lincoln, is an Australian actor.

Wally started playing rugby from a very early age. His father played and trained rugby. He made his senior début for Queensland in 1979. He went on to win several leagues title with more than five teams. In 1981, The Australian player played his first international game. He went on to play until 1991 with his national team. In October 2016, he became the 38th Legend of Australian Sport at the Sport Australia Hall of Fame awards.