Isaac Kiese Thelin is an international football player who currently plays as a forward for Sweden national team and professional club football for Waasland-Beveren, on Loan from Anderlecht.

The 25 years footballer who started playing since the age of five is currently representing his country in the world cup. With his passion and hard work, he has earned a name, fame, and money in very young age.

Isaac Kiese Thelin was born on 24 June 1992 in Orebro, Sweden. His mother is Swedish while his father is a Congolese. As he was born in Sweden, he is of Swedish nationality and belongs to Swedish ethnicity.

However, the details regarding, from where he was educated and other early life details are hidden somewhere like a secret recipe.

Isaac Kiese Thelin's net worth is yet to be reviewed. But while talking about his monthly salary, he earns around £70K. If it is calculated per annum then he earns £840K per year from his current club.

Currently, his market value is estimated at £2.25 million. While transferring to his current club from Malmo, he had his highest market value of £3.15 million.

Isaac Kiese began his playing career since the very early age of five by joining Karlslunds IF from Orebro club in the year 1997.  After the long year of contribution in Karlslunds IF he was transferred to Allsvenskan side IFK Norrkoping in the year 2011.

Isaac Kiese career took a breakthrough in 2012 when he appeared in eleven matches. While transferring from Norrkoping, Malmo paid around £99k to his previous club in the year 2014.

After that, he was sent to G. Bordeaux on January 22, 2015, by Malmo in £3.15m. Then, he is transferred on loan to RSC Anderlecht and Waasland-Beeveren.

Isaac made his international debut against Montenegro on 15 November 2014. And finally, in May 2018 he was selected for the 2018 FIFA World Cup in Russia along with his other teammates such as Seb Larsson, Emil Forsberg, Marcus Berg 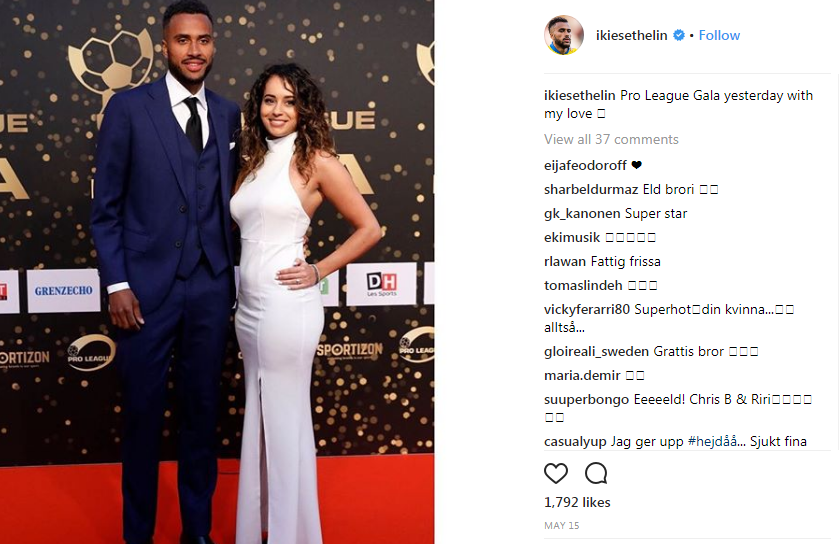 Seeing the above picture with a caption, it seems like they are already engaged as the lady has a ring on her ring finger. But we are unknown about whether they are married or not.