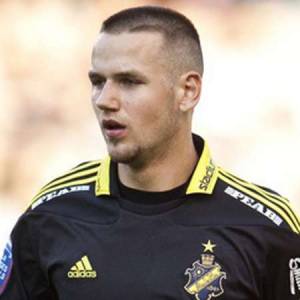 Alexander Milosevic is a Swedish professional football player who currently plays for Nottingham Forest as a Centre back. The young talent has previously played for the clubs like Hannover, Darmstadt, Caykur Rizespor, on loan from Besiktas, having professionally debuted with Vasalunds IF.

Since 2013, Milosevic is in the Sweden National Team. Furthermore, his net worth in 2019 is estimated at over $2 million. Regarding his personal life, he is single and unmarried.

Alexander Milosevic's Net Worth and Endorsement

His net worth is estimated at around $2 million including all his assets as well as his income.

As of 2019, Milosevic gets paid €27,000 as his weekly salary which around €1,404,000 per annum. Apart, he too earns good sum as a salary from the national team and from the endorsement deals with various brands including Nike.

27, handsome hunk, Alexander Milosevic is possibly single and unmarried as he has not disclosed any information regarding his love life, not even his relationship status. He stands six feet three inches tall with the sexy look and perfect weight of 82 kg. There is no doubt millions of heart beats for him but it seems that he is much focused on his football career rather than anything,

Besides, he is a tattoo lover and has inked in his both hand.

Waiting for my moment ?? #AM

According to some sites, Milosevic is rumored to be dating a girl named Pernilla. However, no concrete proof is available about the alleged relationship.

Alexander Milosevic was born on 30th January 1992, in Rissne, Sweden. His birth sign is Aquarius. Talking about his nationality, Milosevic is Swedish.

Milosevic was raised by his father, Goran Milosevic who immigrated from Serbia and mother who is Swedish with Finnish roots.

He started his football career, playing for Rissne IF and later switched to Vasalunds IF. Going as a striker till the age of seventeen at Vasalunds, Milosevic first changed position to the central midfield and was then converted to move back to the central defense where he thrived.

He also spent some time with ALK.

On the first of January 2009, Milosevic was promoted up to the main team of the Vasalunds IF. He played only a season for the club, appearing in total 24 games for 5 goals.

On 1st February 2011, Milosevic moved to ALF, signing a 4-year contract after a long drawn out process including training with AIK rivals Djurgardens IF. He made his AIK debut against Mjallby, replacing Per Karlsson who was injured pre-season training. After gaining victory over the match, Milosevic earned a lot of attention, not only for he was awarded the man of the match but also for receiving a martial arts inspired kick to the head from Mjalbys Peter Gitselov.

His first goal for the AIK came on 22nd April 2012, against GIF Sundsvall.

On 7th January 2015, Milosevic signed for Besiktas, agreeing on the deal of three-and-half-year contract with an option to extend the contract 2 more years for a reported fee of $1.23 Million.

While his career at Besiktas, Milosevic enjoyed the spell with few clubs including Hannover, Darmstadt, and Caykur Rizespor.

On 28th February 2018, Milosevic returned to his former club AIK, signing a contract until 31st December 2016.

On 1 February 2019, he inked an eighteen-month contract with EFL Championship side Nottingham Forest.

Though Milosevic was born in Sweden, he is eligible to play for Serbia and Finland, as his father immigrated from Serbia and his mother is Swedish with Finnish roots.

Milosevic has represented Serbia internationally as the team member of Serbia U-17 national team. Nevertheless, he accepted the offer from Sweden U-19 coach Hans Lindbom’- to a Sweden U19 training camp and soon earned his first cap for both Sweden Under-19 and Under-21 national team.

In 2013, he earned his first call-up to the Sweden senior squad. Till date, he has won 5 caps with his national side.