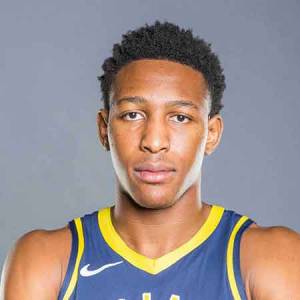 As a Center, Ike Anigbogu reportedly earns around $1,315,587 as his yearly salary from Indiana Pacers. Further, Ike Anigbogu has an estimated net worth of over $1 million.

Ike Anigbogu was born on October 16, 1998, in San Diego, California to parents Chris Anigbogu and Veronica Anigbogu. As per his nationality, he is American and belongs to African ethnic group. Further, his star sign is Libra. He grew up along with his 3 siblings, two sisters, Ada and Onyi, and one brother, Tochi.

Happy Mother’s Day to yours and mine!!

He participated as a freshman in the Temescal Canyon High in Lake Elsinore and played in their junior varsity team. The following year he moved to the Centennial Highschool in Corona, where he also participated in the International Baccalaureate programme.

Ike Anigbogu, in his high school career, held an average of 2 points and 2.5 rebounds. After completing high school, Ike Anigbogu enrolled at University of California, Los Angeles and played for the Huskies.

Talking about his high school career, as a junior in 2015, Anigbogu led the team to the regional final of the state, where the Huskies lost to Chino Hills, led by Lonzo Ball. In his senior year, he was limited by an injured knee. For the season, he finished with averages of 19 points, 11 rebounds, and 3 blocks.

Ike Anigbogu Net Worth And Salary

Ike Anigbogu so far has made earnings of $2,328,242 from his entire NBA career. Further, the NBA Player Ike Anigbogu earns a good amount of money from various sponsorships.

Further, he is one of the least paid players of Indiana Pacers while Victor Oladipo, Thaddeus Young is among the highest earner of the team.

Anigbogu announced that he would declare for the 2017 NBA draft. Even with his limited play time and raw offensive skills, he was valued as a prominent defender for his athleticism and potential.

In his fourth pre-draft attempt, Anigbogu twisted his right knee while working out with the Indiana Pacers, preventing him from taking part in any further workouts leading to the draft.

His draft stock fell over concerns about his knee and eventually, Pacers chose him in the second round with the 47th overall pick. He was joined in Indiana by UCLA teammate T. J. Leaf, who was selected by Indiana in the first round.

On 12 July, the Pacers signed a rookie NBA contract with him. Anigbogu debuted on 20 October 2017 with a loss of 114–96 to the Portland Trail Blazers, playing only for two minutes.

Blessed to see 20 years of age today.?? And what better present then season starting tomorrow ????

He was the youngest player in the NBA in 2017–18. Further,  he has also been assigned several times to the NBA G League affiliate of Pacers, the Fort Wayne Mad Ants.

The young center, 20 years old, just started his playing career. He seems to be focused on establishing himself as one of the standout players in NBA. Currently, he is enjoying his single life and there aren't any rumors regarding his probable girlfriend or wife in the media yet.

The Famous NBA star is 6 ft 10 in (2.08 m) in height and weighs around 113 kg. Ike Anigbogu is not only a world-class athlete but also is a very attractive individual.