Herbert Jones is an American basketball player who finished his collegiate career playing for the Alabama Crimson Tide of the Southeastern Conference (SEC). The Shooting guard / Small forward is the recipient of the 2021 SEC Player of the Year, SEC Defensive Player of the Year, First-team All-SEC, and 2× SEC All-Defensive Team.

Northport, Alabama native, Herbert Jones was born on 6th October 1998, under the star sign Libra. He is the son of Walter Sr. and Verlander Jones. He has a brother, Walter Jr., who finished his college basketball for Texas-Rio Grande Valley and Alabama A&M.

The college athletes do not get paid playing for the college team. However, college athletes can make money from endorsements or branded social media posts. Hence, Herbert Jones, No. 1 – Alabama Crimson Tide's shooting guard has not earned a penny from the team, and further, there is no information about his endorsements.

Jones, who has announced for the 2021 NBA draft is ranked the No. 56 available players in the July 29 draft by ESPN. He is likely a second-round pick. If he lands in any of the NBA franchise as per the projections, Jones will be a millionaire soon. As of 2021, his net worth is under review.

There is no information on the media if Herbert Jones is dating or single. The hunk has maintained his love life as secret as possible. However, scrolling through his Instagram, there is a post from December 2019 where he has featured a girl and captioned the post with a blue heart. 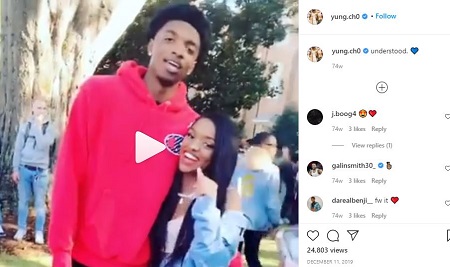 Is the girl from the post is Jones's girlfriend? Well, there are no comments from both sides. Hence, 6 ft 8 in (2.03 m) tall hunk is believed to be single.

Herbert Jones began playing varsity basketball at Sunshine High School in Newbern, Alabama as a 7th grader alongside her brother Walter Jr, coached by their father. After the sophomore season, he was transferred to Hale County High School, following his father who was an assistant coach. During his senior season, he averaged 16.6 points, 8.2 rebounds, and four assists. Over the offers from  Auburn, Georgia, Georgia Tech, and Florida, Jones signed to play for Alabama.