Harrison Butker is an American football kicker who is currently signed to Kansas City Chiefs of the National Football League (NFL). Originally, he was picked by the Carolina Panthers in the seventh round (233rd overall) of the 2017 NFL Draft, however, he was waived by the team and Butker joined Chiefs. With Chiefs, he won Super Bowl champion (LIV) and PFWA All-Rookie Team (2017).

Decatur, Georgia native, Harrison Butker was born on 14th July 1995, under the star sign Cancer. The twenty-four years holds an American nationality and belongs to the white ethnic background. Regarding his physique, he stands 6 ft 4 in (1.93 m) and weighs 205 lb (93 kg).

How Much Is Harrison Butker Salary In 2020? Know His Contract & With Chiefs 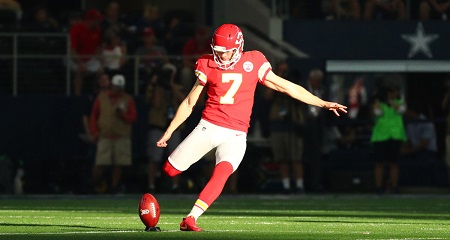 A high school sweetheart, Harrison Butker, and Isabelle tied the knot on 10th February 2018 in a devout Christian ceremony. The paid dated almost eight years long before exchanging the vows. On 9th May 2017, Butker proposed to Isabelle and gave an IG shoutout sharing their adorable engagement pictures.

He captioned the picture, “From the first moments of our relationship, back in freshman year of high school, I always envisioned marrying you and raising a family together. You push me to be a better man and are so patient and forgiving when I fall short. I am truly amazed at how God has worked in your life and in our relationship and pray we continue to learn and grow from each other. Can’t wait to see what our future holds together as a married couple! I love you Izzy.” 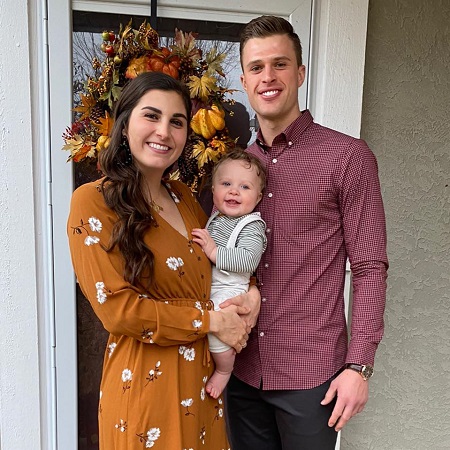 Harrison Butker with his wife Isabelle and their child SOURCE: Fabwags.com

On 27th January 2019, Butker and his wife, Isabelle welcomed their first child, so son James Augustine Butker who came into the world weighing 9 pounds, 5 ounces. The football kicker often features his family pictures on his Instagram where he has 121k followers.

Butker enrolled at The Westminster Schools, where he played for the school football team. At the time, he broke the school record for a field goal of 53 yards. Along with a football, he excelled in basketball and soccer, winning three state championships in soccer.

Upon graduation, he attended Georgia Institute of Technology where he played for the Georgia Tech Yellow Jackets football team from 2013 through 2016. In school history, he is the all-time leading scorer as well as was a captain of the team for his senior year.