2× Pro Bowl, Dustin Colquitt is an American football player who is currently playing side, the Kansas City Chiefs of the National Football League (NFL) as their No.2 Punter. He was picked by the Chiefs' in the 2005 NFL draft with 99th pick in the 3rd round. In the 2019 season, the football punter has recorded a Chiefs franchise record for most games played, surpassing former teammate Will Shields.

Knoxville, Tennessee native, Dustin Colquitt was born as Dustin Farr Colquitt on May 6, 1982, under the star sign Taurus. The thirty-seven years old is an American by nationality who came from a white ethnic background. Initially, he played football and soccer at Bearden High School in Knoxville. later he chose football and played for the University of Tennessee.

How Much Is Dustin Colquitt's Net Worth In 2020? Know His Contract & Career Earnings.

As of 2020, Dustin Colquitt has an estimated net worth of $20 million, soley earned from his NFL career.

Besides, the NFL star is a co-founder of TeamSmile, an organization that offers free dental care to underserved children.

Colquitt is married to Christia Colquitt since 2005. The couple shares five children: Brinkley, Colston, Hartley, Kinsler, and Cannon. Their children's names seem very unusual, but the duo has put a lot of thought into each moniker. 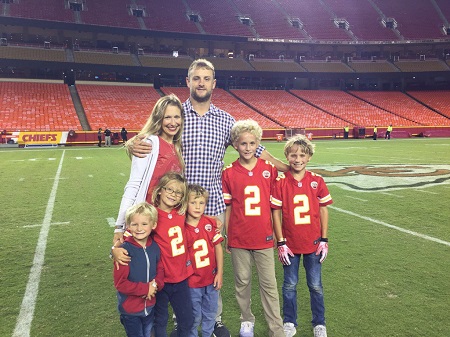 Similarly, the only girl in the group, Hartley, 4, was named after a famous greenhouse maker in the United Kingdom. This adorable baby girl is a bit of a tomboy, Dustin says. "She's got a great straight-arm hook," further he added, "but in the next moment she a girly-girl."

Coming in 4th is Kinsler, was named after Ian Kinsler, the former 2nd baseman for the Detroit Tigers whereas the fifth one Cannon, which is the name Dustin's parents originally wanted to name him.

Besides, Colquitt is a Christian devotee who has spoken about his faith, "I think God put me in this position as a punter and in professional football because … He wants something out of me to be able to share with other people. As a Christian, I think God has given me that platform to say, 'Hey, I've allowed you to do a lot of things and I need you to speak My name. He always finds a way to put His people in situations where they can spread His Word … ."

Comes From A Family With A Distinguished Lineage Of Punters 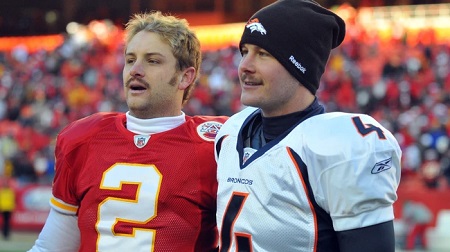 Moreover, he is an elder brother of Minnesota Vikings' Punter, Britton Colquitt and a nephew of former NFL punter Jimmy Colquitt.